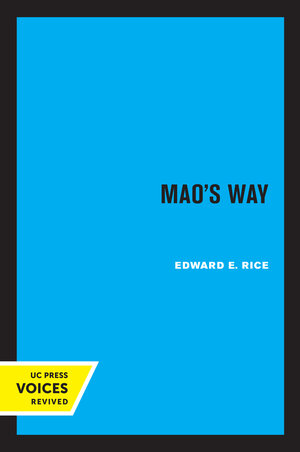 This major biography of Mao draws on never before seen documents to reveal surprising details about Mao's rise to power and leadership in China. This title is part of UC Press's Voices Revived program, which commemorates University of California Press's mission to seek out and cultivate the brightest minds and give them voice, reach, and impact. Drawing on a backlist dating to 1893, Voices Revived makes high-quality, peer-reviewed scholarship accessible once again using print-on-demand technology. This title was originally published in 1972.

Edward E. Rice was a career Foreign Service officer and Rice was U.S. Consul General in Hong Kong during the years of China's Cultural Revolution.

"An old China hand and career Foreign Service officer, Rice was U.S. Consul General in Hong Kong during the years of China's Cultural Revolution. In polished, journalistic prose he summarizes the whole sweep of China's complex history in the 20th century, making Mao Tse-tung the focal point. . . .This book aptly fills the gap in Chinese history, 1965-71, so far unattempted by any major historian, and provides valuable background for the recent spate of on-the-scene observations." --Choice. "Complete recapitulation, enriched by the wisdom and perception of a lifelong immersion in Chinese society and American bureaucratic politics. . . .in some respects the world's oldest and largest society remains more remote from external view than in the days of Marco Polo. These circumstances make especially valuable the sensitivity, patience and sheer effort by which [Rice has] illuminated the central arena politics at a critical juncture when China approaches the transition from Mao Tse-tung to his successors." --The New Republic "The product of his first-hand experience of China and his assiduous research is this authoritative work on the Cultural Revolution and the man responsible, Mao Tse-tung. . . .a masterly, fully documented history and interpretation of China-shaking events. The thorough scholarship and lucid prose of this superb work will commend it to all who are interested in China and our relations with the Chinese. (Buy this book, don't borrow it; and don't lend it, you might not get it back.)" --Foreign Service Journal "Really zeros in on the forces and factors behind the last decade's turbulent events. . . .one of the best surveys of developments in Chinese politics in the post-Leap Forward period." --National Review