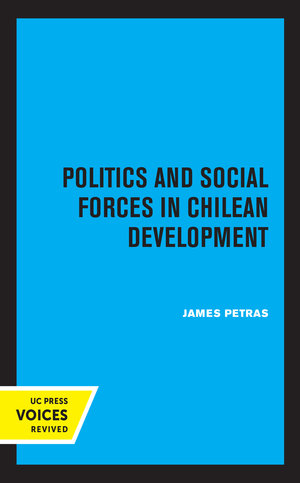 Chile, which suffering from many of the same social and economic problems that afflict other Latin American countries, has enjoyed remarkable political stability. With the exception of one brief interlude, Chile has been governed by elected rules for half a century. The feature of Chilean development that explains its exceptional nature in contrast to the rest of Latin America is the special role of the bureaucracy, which functions as a broker for the conflicting demands of both the new and the traditional groups. Yet a strong dichotomy is evident between the entrepreneurial and bureaucratic elites, which have benefited and participated in the dominant society, and the peasantry, which has been largely exploited and excluded from the polity. Petras finds that the attempts to develop a dynamic industrial society in Chile have so far ailed. Chronic problems of slow economic growth and a rigid social system have been managed through a delicate system of political balances involving established parties and interest groups. While this arrangement has contributed to Chile's stability, it has also served to delay the entry of the peasantry and urban lower class into the polity, and as these groups do enter the political arena, they do so as radicals, increasingly hostile to established leaders and institutions. Working with fresh data, Petras considers virtually every aspect of Chile's social, political, and economic development, including industrialization and the roles of the right wing, the middle class, the peasantry, and the bureaucracy; and he gives detailed consideration to the programs and behavior of the Popular Action Front (FRAP) and the Christian Democratic party. In his final chapter,the author hazards a number of predictions concerning the future course of Chilean politics. He anticipates that the present trend toward basic social change will continue and that this will include limitation of the powers and prerogatives of the rich, a greater role for the government in planning and directing the economy, and some outright expropriation. In the long run, a realignment of major politcal forces is probably, with the likely result that opposition to reform will increase. The heavy involvement of North American firms in the Chilean copper-mining industry could lead to a conflict between a national-popular government in the United States. This title is part of UC Press's Voices Revived program, which commemorates University of California Press's mission to seek out and cultivate the brightest minds and give them voice, reach, and impact. Drawing on a backlist dating to 1893, Voices Revived makes high-quality, peer-reviewed scholarship accessible once again using print-on-demand technology. This title was originally published in 1969.