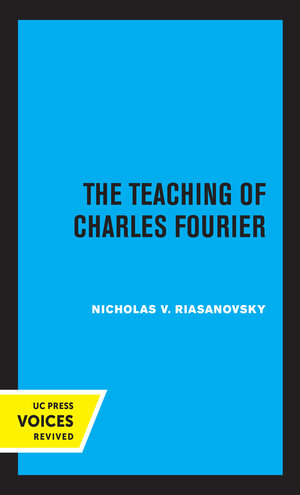 The Teaching of Charles Fourier

Charles Fourier has generally been studied in relation to particular segments of his teaching. Consequently he is known only in one or another of the roles to which biographers or commentators have assigned him, such as that of a social critic, a precursor of Marx, a theoretician of the cooperative movement, or even a progenitor of today's worldwide revolutionary turmoil. Riasanovsky points out that two considerations make an adequate presentation of Fourier's ideas unusually difficult. For one thing, his thought was all of a piece, organically united in a multibranched universal formula so that it is virtually impossible to do justice to a period, a part, or a particular aspect of his teaching without dealing with the whole. For another, this formula was essentially mad and encompassed extremely bizarre and eccentric elements. Most writers have been unprepared to admit, let alone accept, the totality of his teaching. The primary purpose of this book is to state Fourier's system in its own terms, not in terms of its possible contribution to a different intellectual orientation. Riasanovsky succeeds admirably in this task, summarizing for the first time within one volume the essence of Fourier's ideas, which are of an almost overwhelming profusion in their original form. He also examines the relation of Fourier's views to the general currents of modern thought, and delineates his place on the intellectual map of the modern world. This title is part of UC Press's Voices Revived program, which commemorates University of California Press's mission to seek out and cultivate the brightest minds and give them voice, reach, and impact. Drawing on a backlist dating to 1893, Voices Revived makes high-quality, peer-reviewed scholarship accessible once again using print-on-demand technology. This title was originally published in 1969.

Nicholas V. Riasanovsky was Professor of History, Emeritus at the University of California, Berkeley.