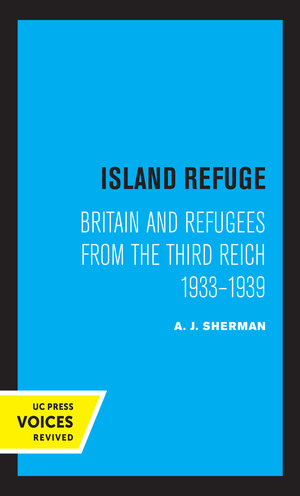 Island Refuge Britain and Refugees from the Third Reich 1933 - 1939

The acrimonious debate over the British policy toward refugees from the Nazi regime has scarcely died down even now, some forty years later. bitter charges of indifference and lack of feeling are still leveled at politicians and civil servants, and the assertion made that Great Britain's record on refugee matters is shabby and unworthy of her liberal traditions. It has now become possible to investigate the truth of these charges and to analyse the reaction tin Britain to refugees from the Third Reich throughout the eventful years preceding the outbreak of war. Based on Government and private papers only recently released for public scrutiny, this book is the first authoritative study of the British response to a refugee crisis which posed many highly emotional and contentious issues in both domestic and foreign policy, and proved na acute irritant in Anglo-American relations. There were no simple answers, no obvious or rapid solutions in a world which frequently seemed to have no room for refugees and but scant sympathy for their plight. Harassed by conflicting pressures form home and abroad, all too aware that greater generosity to refugees from Nazism might well inspire imitative mass expulsions from Eastern Europe, Whitehall officials struggled to maintain an older British tradition of political asylm while still avoiding, at a time of massive unemployment, a sudden large-scale influx of aliens. Initial caution, insensitivity and confusion gave way after the Anschluss to a greater awareness of the critical need, and ultimately to a large-scale modification, under the sheer pressure of refugee numbers, of polices which had virtually hardened into constitutional doctrine. Britain's record concerning refugees from the Third Reich was a mixed one. Far less welcoming at first than a number of countries, but ultimately more generous than many, including the United States, Britain did grant asylum to a significantly large number of refugees in the crowded months before the outbreak of hostilities. The reasons for the dramatic turnabout in British refugee policy emerge clearly from this dispassionate and carefully documented study. Inland Refuge sheds definite light on a largely unexplored and still highly controversial episode in twentieth-century history. This title is part of UC Press's Voices Revived program, which commemorates University of California Press's mission to seek out and cultivate the brightest minds and give them voice, reach, and impact. Drawing on a backlist dating to 1893, Voices Revived makes high-quality, peer-reviewed scholarship accessible once again using print-on-demand technology. This title was originally published in 1973.

A. J. Sherman is a Research Fellow at St. Antony's College, Oxford, was formerly engaged in international banking in New York and London. He has a doctorate in History from Oxford, and also holds BA and MA degrees from Columbia University and an LL.B from Harvard Law School.