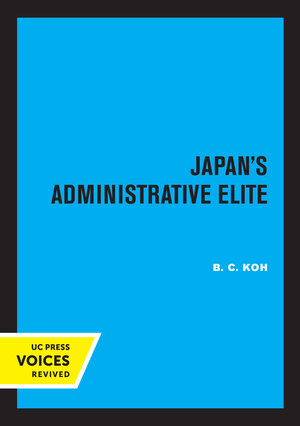 A major player in Japanese society is its government bureaucracy. Neither Japan's phenomenal track record in the world marketplace nor its remarkable success in managing its domestic affairs can be understood without insight into how its government bureaucracy works—how its elite administrators are recruited, socialized, and promoted; how they interact among themselves and with other principal players in Japan, notably politicians; how they are rewarded; and what happens to them when they retire at a relatively young age. Yet, despite its pivotal importance, there is no comprehensive and up-to-date study of Japan's administrative elite in the English language. This book seeks to fill that gap. Koh examines patterns of continuity and change, identifies similarities and differences between Japan and four other industrialized democracies (the United States, Britain, France, and Germany), and assesses the implications of the Japanese model of public management. Though many features of Japanese bureaucracy are found in the Western democracies, the degree to which they manifest themselves in Japan appears to be unsurpassed. Koh shows that the Japanese model of public management contains both strengths and weaknesses. For example, the price Japan pays for the high caliber of its administrative elite is the stifling rigidity of a multiple track system, a system with second-class citizens and demoralized "non-career" civil servants who actually bear a lion's share of administrative burden. The Japanese experience demonstrates not only how steep the price of success can be but also the enduring effects of culture over structure. This title is part of UC Press's Voices Revived program, which commemorates University of California Press's mission to seek out and cultivate the brightest minds and give them voice, reach, and impact. Drawing on a backlist dating to 1893, Voices Revived makes high-quality, peer-reviewed scholarship accessible once again using print-on-demand technology. This title was originally published in 1989.

B. C. Koh is Professor Emeritus of Political Science at the University of Illinois at Chicago.