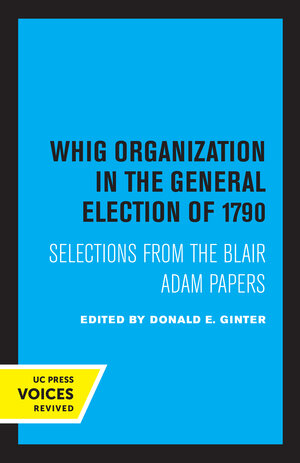 Nearly forty years ago, Sir Lewis Namier's studies showed that there were no organized national political parties in England during the middle of the eighteenth century, and historians have assumed that much the same statement could be made about het period from 1780's to the 1830's. Professor Ginter questions that assumption, and demonstrates that the origins of modern British electoral organization and political parties can be dated at about the end of the American War. The papers of William Adam at Blair Adam reveal that the tone and techniques of opposition politics began to undergo a fundamental change during the 1780's. In these years the Whig Opposition was unified under the leadership of the Duke of Portland and Chales James Fox, and it developed a surprisingly extensive political orientation. The party broke out of the restrictive parliamentary orientation that had heretofore characterize opposition politics and turned ot the country a large for support of its program and personnel. By 1790 British general elections were no longer contested exclusively by individuals and ad hoc committees, Adam, the party's political manager, in collaboration with the Duke of Portland, directed the general election campaign of 1790 from offices in Burlington House, and sent party agents and funds into those constituencies in which candidates had decided to stand a contest, but also expended funds in an effort to secure new seats for party members unable to find a likely constituency through their own efforts. The present volume, a selection from the family papers at Blair Adam, fully demonstrates the extent and quality fo the electoral organization of the Whig Opposition. This title is part of UC Press's Voices Revived program, which commemorates University of California Press's mission to seek out and cultivate the brightest minds and give them voice, reach, and impact. Drawing on a backlist dating to 1893, Voices Revived makes high-quality, peer-reviewed scholarship accessible once again using print-on-demand technology. This title was originally published in 1967.

Donald E. Ginter was Professor Emeritus in the Department of History, Concordia University.

"Dr. Ginter's material is of great importance and comes from a source hitherto generally inaccessible to historians. His work is an important contribution to the understanding of the development of party organization in modern Britain." --John Brooke