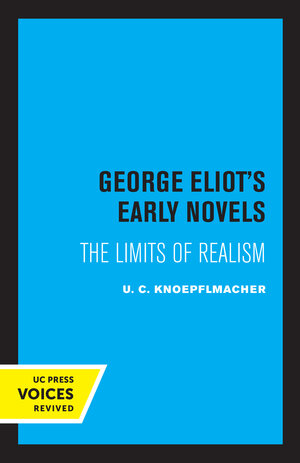 This study shows how George Eliot, a leader in the nineteenth-century intellectual world of Darwin and the Industrial Revolution, wrestled in her early novels with the esthetic problems of reconciling her art and her philosophy. Attempting in her fiction to reproduce the real, temporal world she lived in, George Eliot also tried to reassure herself and her readers that their godless modern world still operated according to higher moral laws of justice and perfectibility. U. C. Knoepflmacher examines here for the first time in sequence George Eliot's development of increasingly sophisticated forms of fiction in her efforts to reconcile the two conflicting orientations in her thought. We see this popular novelist as she progressed artistically from the flawed "Amos Barton" in 1857 up to the balance she achieved in Silas Marner in 1861. And we discover her in the context of her literary antecedents and surrounding in a way that brings many new affiliations to light, particularly the connection of her novels to the writings of Milton, the Romantic poets, and her contemporaries Arnold and Carlyle. Professor Knoepflmacher thoroughly discusses each work in George Eliot's first stage, brining new attention to minor works like "The Lifted Veil" and Scenes of Clerical Life and fresh insights to such well known works as Adam Bede, The Mill on the Floss, and Silas Marner. This title is part of UC Press's Voices Revived program, which commemorates University of California Press's mission to seek out and cultivate the brightest minds and give them voice, reach, and impact. Drawing on a backlist dating to 1893, Voices Revived makes high-quality, peer-reviewed scholarship accessible once again using print-on-demand technology. This title was originally published in 1968.

U. C. Knoepflmacher is Professor of Ancient and Modern Literature, Emeritus at Princeton.