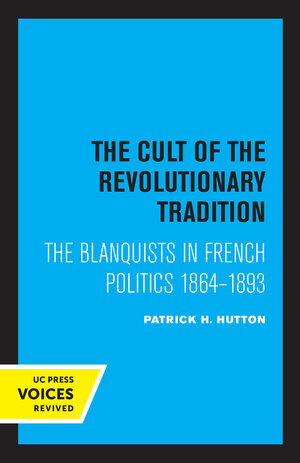 The Cult of the Revolutionary Tradition The Blanquists in French Politics, 1864 - 1893

This pathbreaking study deals with the thought and activities of the disciples of the renowned revolutionary, Auguste Blanqui, from the later years of the French Second Empire (1860s) through the crisis attending the political campaign of General Boulanger (1880s). It explores the mythological significance of Blanqui for the French Lef, the atheist thoughts of the Blanquists as the foundation of their revolutionary politics, the role of the Blanquists in the Paris Commune of 1871, the relationship between Blanquist and Marxist ideologies, and the influence of the Blanquists as promoters of the cult of the Revolutionary tradition in the early years of the Third Republic. The Cult of the Revolutionary Tradition is the first comprehensive study of the Blanquists to appear in French or English. It is also the first to treat seriously the impact of the legend of Blanqui upon his followers and admirers. In tracing their changing conception of the revolutionary cause--from its sources in the radical thought of a Parisian youth movement to its perversion in the proto-fascist doctrine of some aging Blanquists employed myth and ritual to popularize their ideas, and how in the end their efforts to do so transformed their revolutionary party into a conservative sect. Hutton takes issue with the standard interpretation of the Blanquists as unreflective precursors of the Marxists. Far from contributing to Marxist Socialsim, he contends, the Blanquists began with different theoretical assumption and developed a different model of revolution. In describing the antagonisms between Blanquists, guardians of the French Revolutionary tradition, and Marxists, apostles of a new Socialism, the author reveals the obstacles which stood in the way of a unified revolutionary movement in the Third Republic, and sheds light on the ideological divisions which have plagued the French Left ever since. The study raises issue which transcend the French revolutionary experience. In analyzing the Blanquists's conception of revolution as an ultimate concern, it underscores the parallels between religious and revolutionary consciousness. Through the investigation of the myths and rituals of Blanquist revolutionary practice, it offers some observations on the nature of the revolutionary mentality and some perspective upon the phenomenon of revolution in general. This title is part of UC Press's Voices Revived program, which commemorates University of California Press's mission to seek out and cultivate the brightest minds and give them voice, reach, and impact. Drawing on a backlist dating to 1893, Voices Revived makes high-quality, peer-reviewed scholarship accessible once again using print-on-demand technology. This title was originally published in 1981.

Patrick H. Hutton is Professor Emeritus of History at The University of Vermont.