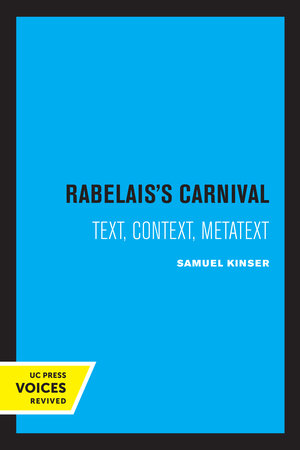 How is it possible, after four centuries, that a major episode in Rabelais's novels remains systematically misread? The episode, which playfully and grotesquely treats the relation of Carnival to Lent, occurs in Rabelais's Fourth Book, his last and most artfully crafted novel. Samuel Kinser argues that the text has been distorted because critics have not attended to the episode's performative as well as literary contexts, overlooking the innovative use Rabelais made in his work of his immediate world. In this original interpretation of the Fourth Book, Kinser evokes the gestures, games, and visual, oral, bodily semantics of Carnival and Lent as they were performed in Rabelais's day. He also underscores the importance to Rabelais of the invention of printing, an innovation which revolutionized the relationships of author and reader. Understanding this and fearing it, Rabelais adopted an extraordinary set of disguises as an author, disguises which in their bewildering interplay constitute the truest sense of his carnival. This title is part of UC Press's Voices Revived program, which commemorates University of California Press's mission to seek out and cultivate the brightest minds and give them voice, reach, and impact. Drawing on a backlist dating to 1893, Voices Revived makes high-quality, peer-reviewed scholarship accessible once again using print-on-demand technology. This title was originally published in 1990.

"Kinser proposes a very persuasive post-Bakhtinian approach to Rabelais's novel and its relation to the carnival. His new historical epistemology, emphasizing as it does the genetic function of an archival 'metatext,' is compatible with a sophisticated semiotic analysis of the Rabelaisian text. This is a timely, erudite and subtle book which bases its theoretical arguments on solid documentary and textual evidence."—Michel Beaujour, New York University