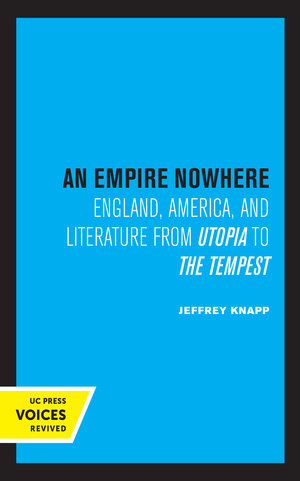 An Empire Nowhere England, America, and Literature from Utopia to The Tempest

What caused England's literary renaissance? One answer has been such unprecedented developments as the European discovery of America. Yet England in the sixteenth century was far from an expanding nation. Not only did the Tudors lose England's sole remaining possessions on the Continent and, thanks to the Reformation, grow spiritually divided from the Continent as well, but every one of their attempts to colonize the New World actually failed. Jeffrey Knapp accounts for this strange combination of literary expansion and national isolation by showing how the English made a virtue of their increasing insularity. Ranging across a wide array of literary and extraliterary sources, Knapp argues that English poets rejected the worldly acquisitiveness of an empire like Spain's and took pride in England's material limitations as a sign of its spiritual strength. In the imaginary worlds of such fictions as Utopia, The Faerie Queene, and The Tempest, they sought a grander empire, founded on the "otherworldly" virtues of both England and poetry itself. This title is part of UC Press's Voices Revived program, which commemorates University of California Press's mission to seek out and cultivate the brightest minds and give them voice, reach, and impact. Drawing on a backlist dating to 1893, Voices Revived makes high-quality, peer-reviewed scholarship accessible once again using print-on-demand technology. This title was originally published in 1992.

Jeffrey Knapp is Professor of English at the University of California, Berkeley.

"In this complex, wide-ranging, and idiosyncratic study, Jeffrey Knapp sets out to disprove the venerable notion that the unparalleled brilliance of England's literary renaissance not only reflected the vision of empire engendered by the discovery of the New World but also drew its inspiration largely from it. . . . [A] remarkable book." --Arthur Ferguson, American Historical Review "Central to an understanding of how early-modern Englishmen conceived of themselves and their place in the world, and equally central to an understanding of what they actually accomplished, both in literature and in overseas expansion." --Richard Helgerson, Albion  "[A] learned and ingenious book. . . . Knapp's fertile mind finds contradictions everywhere, and often in ways that enrich our conception of what poetry was for the Renaissance." --Lawrence Lerner, The Times Higher Education Supplement "Among the new Renaissance cultural historians, Knapp is clearly a star. This book is subtle and forceful, and though it is thoroughly conversant with current critical methodology, it is also startlingly original, and indeed full of wonderful surprises. Sets a standard for work in the field." --Stephen Orgel, author of The Illusion of Power