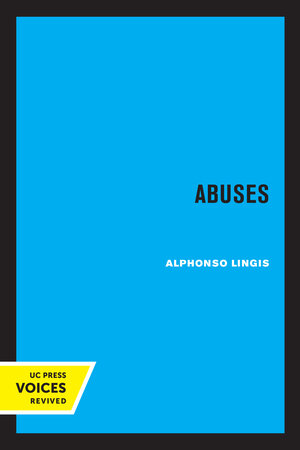 Part travelogue, part meditation, Abuses is a bold exploration of central themes in Continental philosophy by one of the most passionate and original thinkers in that tradition writing today. A gripping record of desires, obsessions, bodies, and spaces experienced in distant lands, Alphonso Lingis's book offers no less than a new approach to philosophy—aesthetic and sympathetic—which departs from the phenomenology of Levinas and Merleau-Ponty. "These were letters written to friends," Lingis writes, "from places I found myself for months at a time, about encounters that moved me and troubled me. . . . These writings also became no longer my letters. I found myself only trying to speak for others, others greeted only with passionate kisses of parting." Ranging from the elevated Inca citadel of Machu Picchu, to the living rooms of the Mexican elite, to the streets of Manila, Lingis recounts incidents of state-sponsored violence and the progressive incorporation of third-world peoples into the circuits of exchange of international capitalism. Recalling the work of such writers as Graham Greene, Kathy Acker, and Georges Bataille, Abuses contains impassioned accounts of silence, eros and identity, torture and war, the sublime, lust and joy, and human rituals surrounding carnival and death that occurred during his journeys to India, Bangladesh, Thailand, Bali, the Philippines, Antarctica, and Latin America. A deeply unsettling book by a philosopher of unusual imagination, Abuses will appeal to readers who, like its author, "may want the enigmas and want the discomfiture within oneself." This title is part of UC Press's Voices Revived program, which commemorates University of California Press's mission to seek out and cultivate the brightest minds and give them voice, reach, and impact. Drawing on a backlist dating to 1893, Voices Revived makes high-quality, peer-reviewed scholarship accessible once again using print-on-demand technology. This title was originally published in 1994.

Alphonso Lingis is Professor Emeritus of Philosophy at Pennsylvania State University. Among his several books are The Community of Those Who Have Nothing in Common, Foreign Bodies, Deathbound Subjectivity, and Libido: The French Existential Theories.