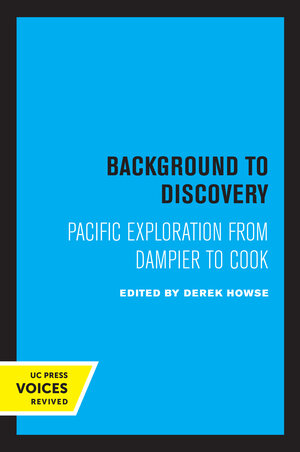 Background to Discovery Pacific Exploration from Dampier to Cook

Background to Discovery recounts the great voyages of discovery, from Dampier to Cook, that excited such fervent political and popular interest in eighteenth-century Europe. Perhaps this book's greatest strength lies in its remarkable synthesis of both the achievements of European maritime exploration and the political, economic, and scientific motives behind it. Writing essays on the literary and artistic response to the voyages as well, the contributors collectively provide a rich source for historians, geographers, and anyone interested in the history of voyage and travel. This title is part of UC Press's Voices Revived program, which commemorates University of California Press's mission to seek out and cultivate the brightest minds and give them voice, reach, and impact. Drawing on a backlist dating to 1893, Voices Revived makes high-quality, peer-reviewed scholarship accessible once again using print-on-demand technology. This title was originally published in 1990.

Derek Howse is former Head of Navigation and Astronomy at the National Maritime Museum, Greenwich, England, and coeditor of A Buccaneer's Atlas: Basil Ringrose's South Sea Waggoner. In 1983-84 he served as Clark Library Professor at the University of California, Los Angeles.