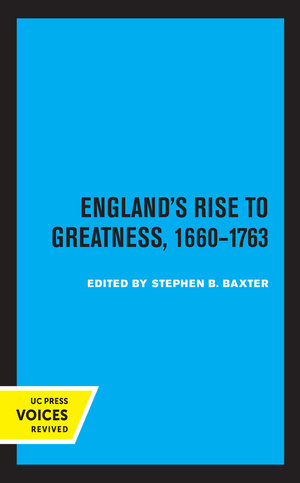 In 1660 England was already prosperous, free, civilized, and the possessor of the makings of an empire. In the century to follow, the island nation became the world's greatest power. This cohesive collection of essays on a wide range of topics illuminates important facets of the political history of England from the Restoration to the American War of Independence. Arthur J. Slavin of the university of Louisville discusses and important problem in legal history in his "Craw v. Ramsey: New light on an Old Debate." Jacob M. Price of the University of Michigan takes another look at the Excise Crisis. Ragnhild M. Hatton of the London School of Economics sheds new light on George I. Daniel A. Baugh of Cornell University considers "pauperism, Protestantism, and Political Economy: English Attitudes toward the Poor 1660 - 1800." Anglo-Savoyard relations are the topic of Geoffrey Symocox of the University of California, Los Angeles. The late Arthur M. Wilson of Dartmouth is represented by a wise and charming paper entitled "The Enlightenment Came First to England." Lois G. Schwoerer of George Washington University finds new perspectives while examining the Glorious Revolution. John Brewer of Harvard explains "the Number 45: A Wilkite Political Symbol." Clayton Roberts of the Ohio State University discusses "Party and the Patronage in Later Stuart England," while Stephen Baxter of the University of North Carolina takes up some aspects of the conduct of the Seven Years War. All of the contributions were originally delivered at the Wiliam Andrews Clark Memorial Library during Stephen Baxter's tenure as Clark Library Professor in 1977 - 1978. Each of the essays will appeal to a learned audience of specialists, and the variety of topics will interest the general reader. This collection represents the leading scholarship on this remarkable period of English history. This title is part of UC Press's Voices Revived program, which commemorates University of California Press's mission to seek out and cultivate the brightest minds and give them voice, reach, and impact. Drawing on a backlist dating to 1893, Voices Revived makes high-quality, peer-reviewed scholarship accessible once again using print-on-demand technology. This title was originally published in 1983.

Stephen B. Baxter is Professor Emeritus of History at the University of North Carolina at Chapel Hill.