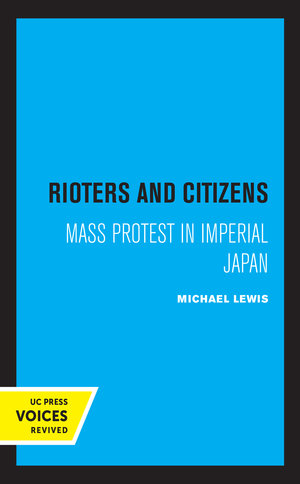 On 22 July 1918 a group of Japanese fishermen's wives met in a small village on the coast to discuss what they could do to lower the spiraling cost of rice. This peaceful meeting gave rise to the 1918 race riots, a series of mass demonstrations and armed clashes that spread rapidly throughout the country on a scale unprecedented in modern Japanese history. In this penetrating study, Michael Lewis questions standard historical interpretations of the riots. What political significance did the riots have in the communities where they occurred? How and why did protest change from region to region or when carried out by different groups? How did officials, community leaders, and businessmen cope with the unrest? What effects did the riots have on national and local political relations and economic ties among these various groups? Lewis argues that the 1918 protests defy a single typology--urban and rural protests had different causes, patterns, forms of mediation, and resolutions. In 1918 Meiji leaders had been struggling for fifty years to create a new citizenry, unified ideologically and consistently supportive of national goals. The disunity revealed by the riots does not suggest that Japan had become polarized between the people and the state; rather, in the wake of the riots, new forms of social policy and public political involvement became possible. In analyzing the changing traditions of Japanese popular protest in the transition from a rural to an industrial economy, Rioters and Citizens suggests that the diversity of Japanese protests necessitates a rethinking of the stereotypical images of prewar Japanese society as blandly uniform and rigidly controlled by government ideology. It further suggests that in Japan, as in Europe, the action of the unenfranchised crowd came to influence the course of political and social change. This title is part of UC Press's Voices Revived program, which commemorates University of California Press's mission to seek out and cultivate the brightest minds and give them voice, reach, and impact. Drawing on a backlist dating to 1893, Voices Revived makes high-quality, peer-reviewed scholarship accessible once again using print-on-demand technology. This title was originally published in 1990.

At the time of original publication, Michael Lewis was Associate Professor of History at Michigan State University.

"This book does more than present a vivid and richly nuanced analysis of the events of the summer of 1918. It also provides valuable information on the lives and lifestyles of ordinary Japanese, on the police, local elites, and officials of the central government, and on regional diversity within Japan." --Ann Waswo, Oxford University "An influential contribution to what is now the liveliest area of modern Japanese history--labor and social history of the early twentieth century. given Lewis's ability to contextualize each area of dispute and to detail the diverse organizations, strategies, and courses of actions, he gives us an appreciation of the richness and diversity that is lacking in previous accounts. This book significantly enhances our understanding of those crucial events." -- William Kelly, Yale University "An important examination of economic development and social protest in twentieth-century Japan." --Irwin Scheiner, University of California, Berkeley