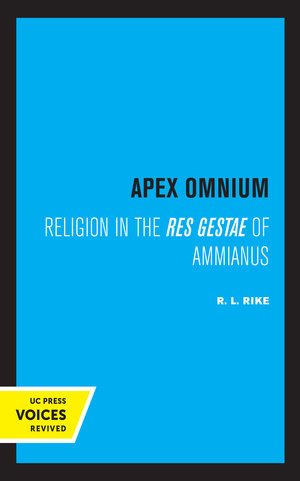 Apex Omnium Religion in the Res Gestae of Ammianus

One of the masterpieces of Greco-Roman literature is the history written by Ammianus Marcellinus near the end of the fourth century A.D. His work bears unique witness to an empire struggling at once toward traditional and transformation, the old Rome of Augustus and the new Rome of Christ. Embodied within Ammianus's history is a universally admired spirit of independence that has, however, led to a steady denaturing of the historian's personal commitment to particular causes. At the hands of modern critics, Ammianus frequently seems to lose his character, and his frequently seems to lose his character, and his religion too vanishes. Rike reconstructs Ammianus's religion from the beginning and concludes that he was an enthusiastic pagan whose firm commitment to traditional beliefs cannot be understood without changing our usual conceptions of late Roman religion. Rike's study widens our too narrowly philosophical sense of paganism; the historian's striving will remind us of the vital spiritual continuum which joined the ages of Augustus and Constantine. Accordingly, this book should itself serve as a useful bridge between students of Late Antiquity and traditional classicists. This title is part of UC Press's Voices Revived program, which commemorates University of California Press's mission to seek out and cultivate the brightest minds and give them voice, reach, and impact. Drawing on a backlist dating to 1893, Voices Revived makes high-quality, peer-reviewed scholarship accessible once again using print-on-demand technology. This title was originally published in 1987.

R.L. Rike wrote his dissertation on Religion in the Res gestae of Ammianus at the University of Cambridge.