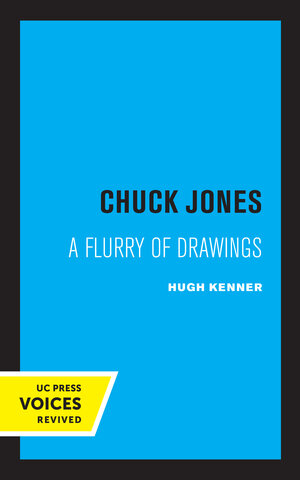 Chuck Jones A Flurry of Drawings

Creator of the mono-maniacal Wile E. Coyote and his elusive prey, the Road Runner, Chuck Jones has won three Academy Awards and been responsible for many classics of animation featuring Bugs Bunny, Daffy Duck, Porky Pig, and Elmer Fudd. Who better to do Chuck Jones than Hugh Kenner, master wordsmith and technophile, a man especially qualified to illuminate the form of literacy that Jones so wonderfully executes in the art of character animation? A Flurry of Drawings reveals in cartoon-like sequences the irrepressible humor and profound reflection that have shaped Chuck Jones's work. Unlike Walt Disney, Jones and his fellow animators at Warner Brothers were not interested in cartoons that mimicked reality. They pursued instead the reality of the imagination, the Toon world where believability is more important than realism and movement is the ultimate aesthetic arbiter. Kenner offers both a fascinating explanation of cartoon culture and a new understanding of art's relationship to technology, criticism, freedom, and imagination. This title is part of UC Press's Voices Revived program, which commemorates University of California Press's mission to seek out and cultivate the brightest minds and give them voice, reach, and impact. Drawing on a backlist dating to 1893, Voices Revived makes high-quality, peer-reviewed scholarship accessible once again using print-on-demand technology. This title was originally published in 1994.

Hugh Kenner is one of America's great literary critics and has written on a range of subjects that includes Ezra Pound, James Joyce, Samuel Beckett, T. S. Eliot, and geodesic domes.

"A comic genius, up there with Keaton and Mack Sennett. I thank him for teaching me so much about breaking all the laws of physics . . . just for the joy of it."—Steven Spielberg "One of America's great filmmakers." --Newsweek "The antsy, unkillable vitality of Jone's draftsmanship is an indication of what sets him apart from every other cartoon director--a signature that's the equivalent of the elusive musical concept called swing. A single line drawn by Chuck Jones implies hilarious movement the way a single note played by Louis Armstrong or Lester Young implies irresistible rhythms." --Terrence Rafferty, The New Yorker