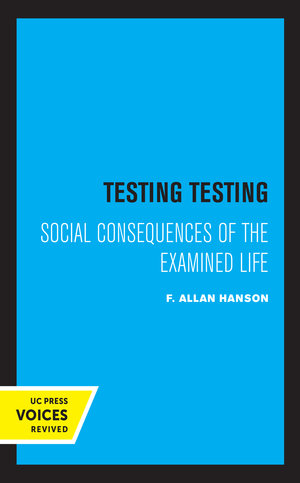 This book is about how our addiction to testing influences both society and ourselves as socially defined persons. The analysis focuses on tests of people, particularly tests in schools, intelligence tests, vocational interest tests, lie detection, integrity tests, and drug tests. Diagnostic psychiatric tests and medical tests are included only tangentially. A good deal of the descriptive material will be familiar to readers from their personal experience as takers and/or givers of tests. But testing, as with much of ordinary life, has implications that we seldom pause to ponder and often do not even notice. My aim is to uncover in the everyday operation of testing a series of well-concealed and mostly unintended consequences that exercise far deeper and more pervasive influence in social life than is commonly recognized. This title is part of UC Press's Voices Revived program, which commemorates University of California Press's mission to seek out and cultivate the brightest minds and give them voice, reach, and impact. Drawing on a backlist dating to 1893, Voices Revived makes high-quality, peer-reviewed scholarship accessible once again using print-on-demand technology. This title was originally published in 1993.

F. Allan Hanson is Professor Emeritus of Anthropology at the University of Kansas. His previous books include Meaning in Culture, Studies in Symbolism and Cultural Communication, and, with Louise Hanson, Counterpoint in Maori Culture.