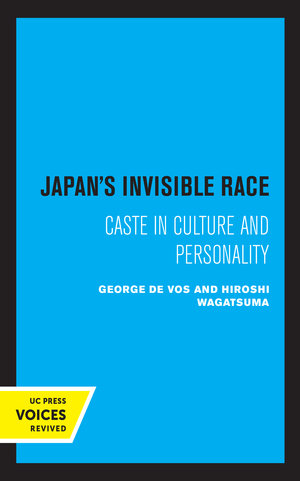 Modern Japanese share a myth to the effect that they harbor in their midst an inferior race less "human" than the stock that fathered their nation as a whole. These pariahs, numbering more than two million, are segregated by caste just as firmly as the Negro is in the United States. The present volume, to which several Japanese and American social scientists have contributed, offeres an interdisciplinary description and analysis of this strangely persistent phenomenon, inherited from feudal times. Its main thesis is that caste and racism are derivatives of identical psychological processes in human personality, however differently structure they may be in social institutions. It finds that what it terms status anxiety, related to defensively held social values, leads to a need to segregate disparaged parts of the population on grounds of innate inferiority. Until the time of their official emancipation in 1871, the so-called eta were distinguished visibly by their special garb. Today few clues to their identity are visible; yet, they remain a distinguishable, segregated segment of the population and bear inwardly, in a psychological sense, the stigma resulting from generations of oppression. This volume traces the story of the outcastes in complete detail--their origin, their stormy post-emancipation history, and their present leftist political significance. Large populations of outcasts live in urban ghettoes within the major cities of south-central Japan. In some of these metropolitan centers they comprise up to 5 percent of the population but contribute 60 to 65 percent of unemployment and relief roles. They have periodic trouble with the police; they manifest a delinquency rate more than three times that of the ordinary population; their children do poorly in school; they are subject to various forms of job discrimination; and few marriages are successfully consummated across the caste barrier. Some try to escape their past identity by becoming prostitutes or by entering the underworld. Those who survive discrimination to achieve status in society either live in fear of exposure [if they are "passing"] or overtly maintain their identity in proud isolation. Some who live in rural communities have achieved equal economic status with their neighbors but not full social acceptance. In their theoretical closing discussion the authors offer a challenging critique of Marxian class theory in introducing the concept of "expressive" exploitation--that is, the psychological use of a subordinate group as a repository of what is disavowed by the values of a culture in a caste society--as distinct in form and function from the "instrumental" economic or political exploitation of subjected minorities in class societies. Contributors:Gerald BerremanJohn B. CornellJohn DonoghueEdward NorbeckJohn PriceYuzuru SasakiGeorge O. Totten This title is part of UC Press's Voices Revived program, which commemorates University of California Press's mission to seek out and cultivate the brightest minds and give them voice, reach, and impact. Drawing on a backlist dating to 1893, Voices Revived makes high-quality, peer-reviewed scholarship accessible once again using print-on-demand technology. This title was originally published in 1966.