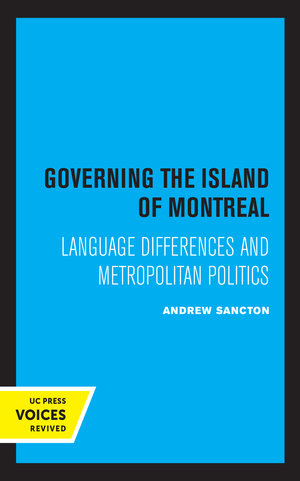 Governing the Island of Montreal Language Differences and Metropolitan Politics

Located at the junction of the St. Lawrence and Ottawa rivers, Montreal Island is the main contact point between French and English Canadians. Prior to Quebec's "Quiet Revolution" of the 1960s, local governments in Montreal both reflected and perpetuated the mutual isolation of French and English. Residential concentration in autonomous suburbs, together with self-contained networks of schools and social services, enabled English-speaking Montrealers to control the city's economy and to conduct their community's affairs with little regard for the French-speaking majority. The modernization of the Quebec state in the 1960s dramatically challenged this arrangement. The author demonstrates how the English-speaking politicians in cooperation with certain French-speaking allies have succeeded in preventing the wholesale adoption of ambitious schemes for metropolitan reorganization. He describes the workings of a society divided by language and ethnicity, where the pervasiveness of the politics of language impedes all plans for comprehensive metropolitan reform. This title is part of UC Press's Voices Revived program, which commemorates University of California Press's mission to seek out and cultivate the brightest minds and give them voice, reach, and impact. Drawing on a backlist dating to 1893, Voices Revived makes high-quality, peer-reviewed scholarship accessible once again using print-on-demand technology. This title was originally published in 1985.

Andrew Sancton is Professor of Political Science at Western University.