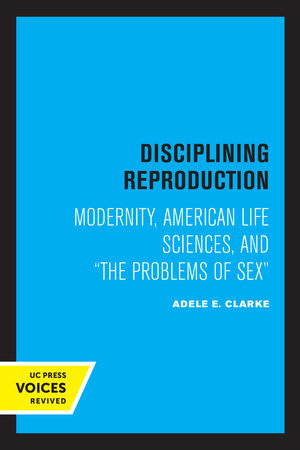 Reproductive issues from sex and contraception to abortion and cloning have been controversial for centuries, and scientists who attempted to turn the study of reproduction into a discipline faced an uphill struggle. Adele Clarke's engrossing story of the search for reproductive knowledge across the twentieth century is colorful and fraught with conflict. Modern scientific study of reproduction, human and animal, began in the United States in an overlapping triad of fields: biology, medicine, and agriculture. Clarke traces the complicated paths through which physiological approaches to reproduction led to endocrinological approaches, creating along the way new technoscientific products from contraceptives to hormone therapies to new modes of assisted conception—for both humans and animals. She focuses on the changing relations and often uneasy collaborations among scientists and the key social worlds most interested in their work—major philanthropists and a wide array of feminist and medical birth control and eugenics advocates—and recounts vividly how the reproductive sciences slowly acquired standing. By the 1960s, reproduction was disciplined, and the young and contested scientific enterprise proved remarkably successful at attracting private funding and support. But the controversies continue as women—the targeted consumers—create their own reproductive agendas around the world. Elucidating the deep cultural tensions that have permeated reproductive topics historically and in the present, Disciplining Reproduction gets to the heart of the twentieth century's drive to rationalize reproduction, human and nonhuman, in order to control life itself. This title is part of UC Press's Voices Revived program, which commemorates University of California Press's mission to seek out and cultivate the brightest minds and give them voice, reach, and impact. Drawing on a backlist dating to 1893, Voices Revived makes high-quality, peer-reviewed scholarship accessible once again using print-on-demand technology. This title was originally published in 1998.

"A book that will alter substantially our conceptions regarding the development and influence of a crucial modern science."—Philip J. Pauly, Rutgers University "Clarke gives us a window into a part of the history of science that has never before been made so accessible but one about which there is great concern. . . . An extremely valuable work."—Emily Martin, Princeton University "As an excellent case study of the powerful analytical potential of the social world's approach, Disciplining Reproduction is a major contribution to theory building in science studies."—Nelly Oudshoorn, University of Amsterdam