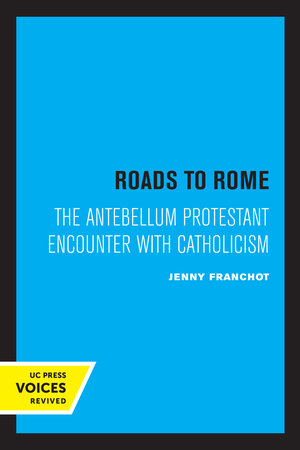 Roads to Rome The Antebellum Protestant Encounter with Catholicism

The mixture of hostility and fascination with which native-born Protestants viewed the "foreign" practices of the "immigrant" church is the focus of Jenny Franchot's cultural, literary, and religious history of Protestant attitudes toward Roman Catholicism in nineteenth-century America. Franchot analyzes the effects of religious attitudes on historical ideas about America's origins and destiny. She then focuses on the popular tales of convent incarceration, with their Protestant "maidens" and lecherous, tyrannical Church superiors. Religious captivity narratives, like those of Indian captivity, were part of the ethnically, theologically, and sexually charged discourse of Protestant nativism. Discussions of Stowe, Longfellow, Hawthorne, and Lowell—writers who sympathized with "Romanism" and used its imaginative properties in their fiction—further demonstrate the profound influence of religious forces on American national character. This title is part of UC Press's Voices Revived program, which commemorates University of California Press's mission to seek out and cultivate the brightest minds and give them voice, reach, and impact. Drawing on a backlist dating to 1893, Voices Revived makes high-quality, peer-reviewed scholarship accessible once again using print-on-demand technology. This title was originally published in 1994.

Jenny Franchot was Associate Professor of English at the University of California, Berkeley.

"[This book] not only changes our view of Protestant and Catholic mentalities before the Civil War but also furnishes new critical vocabularies for how to talk about such things." —Giles Gunn, author of Thinking Across the American Grain