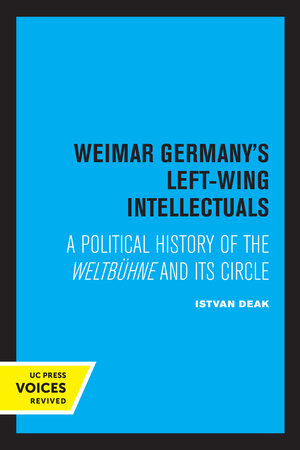 The Germany between the two world wars, which produced some of the greatest literary lights of the century, also produced a forum worthy of them: the brilliantly edited, crusading, lef-oriented (but not party-affiliated) Weltbühne. The present book tells the history of this weekly Berlin journal, discusses the men that ran it and wrote it, and outlines the causes for which it fought. The Weltbühne had three editors--the uncompromising style-conscious Siegfried Jacobsohn, the sharp-tongued, satirical Kurt Tucholsky, and the enigmatic, aristocratic Carl von Ossietzky, martyred by the Nazis. The radical, intellectual elite of Germany (and to come extent outside Germany) contributed to the journal -- Heinrich Mann, Alfred Polgar, Erich Kästner, Alfred Doblin, Bertolt Brecht, Leonhard Frank, Theodor Plievier, Rene Schickele, Lion Feuchtwanger, Ernst Toller, Arnold Zweig; also Arthur Koestler, Romain Rolland, Henry Barbusse, and Leon Trotsky. These men stood for the demilitarization of Germany, the purge of the reactionary administration and judiciary, the end of all restraints on human rights (including the restraints on abortion and homosexuality), complete equality of women, pacifist educational policies, the intellectualization of politics and politicization of the intellectuals, unity of the working-class parties, and socialism. When, on May 11, 1933, on Opera Square in Berlin, the stormtroopers burned books of fifteen authors sinning against the German Volk, thirteen of them had made contribution to the Weltbühne; and since many of them were Jews, the auto-da-fé gave special pleasure to the mob. Mr. Deak recreates with unusual empathy the atmosphere of the era, characterized by terrific social and political issues, which eventually lead to the disaster of the Thirties. The campaigns of the Weltbühne failed, and the contributors were killed or went into exile, with the journal itself moving from Berlin to Vienna to Prague to Paris before it died. Mr. Deak makes a lasting contribution to history by opening to a broader public the records preserved in the pages of this important but largely ignored journal, by selecting and interpreting the issues, and by brining to life the personalities that gave the era its intellectual profile. And understanding of the Weltbühne campaigns is indispensable for an appraisal of Central European politics in the first half of our century. Mr. Deak, in this readable book written with the passionate interest of a person who seems to have been a participant rather than a chronicler, makes this understanding possible by a lucid exposition and a searching analysis of the events. This title is part of UC Press's Voices Revived program, which commemorates University of California Press's mission to seek out and cultivate the brightest minds and give them voice, reach, and impact. Drawing on a backlist dating to 1893, Voices Revived makes high-quality, peer-reviewed scholarship accessible once again using print-on-demand technology. This title was originally published in 1968.

"This remarkably well researched, lucidly argued, and elegantly written study offers first an overview of Berlin literary life in the 1910's and 1920's in a concise history of the Weltbühne and excellent biographies of the journal's three editors. . . . Following eight detailed case studies of the Weltbühne's campaigns on literary and artistic matters, Deak focuses on the journal's efforts to unite Weimar's non-Communist left against rightist authoritarian and Nazi madness." --Choice "Mr. Deak's work supplies an excellent, straightforward account of the Weltbühne campaigns against nationalism, conservatism and facism." --The Nation