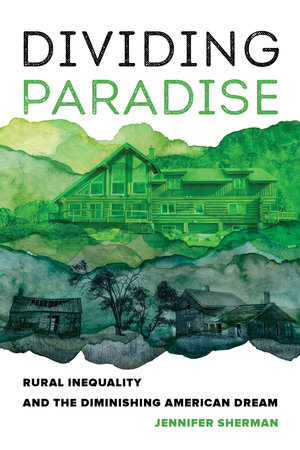 Late-stage capitalism is trying to remake rural America in its own image, and the resistance is telling. Small-town economies that have traditionally been based on logging, mining, farming, and ranching now increasingly rely on tourism, second-home ownership, and retirement migration. In Dividing Paradise, Jennifer Sherman tells the story of Paradise Valley, Washington, a rural community where amenity-driven economic growth has resulted in a new social landscape of inequality and privilege, with deep fault lines between old-timers and newcomers. In this complicated cultural reality, "class blindness" allows privileged newcomers to ignore or justify their impact on these towns, papering over the sentiments of anger, loss, and disempowerment of longtime locals.

Based on in-depth interviews with individuals on both sides of the divide, this book explores the causes and repercussions of the stark inequity that has become commonplace across the United States. It exposes the mechanisms by which inequality flourishes and by which Americans have come to believe that disparity is acceptable and deserved. Sherman, who is known for her work on rural America, presents here a powerful case study of the ever-growing tensions between those who can and those who cannot achieve their visions of the American dream.

How the Pandemic’s ‘Zoomtown Effect’ is Reshaping Rural America

By Jennifer Sherman, author of Dividing Paradise: Rural Inequality and the Diminishing American Dream In the wake of the COVID-19 pandemic, rural communities across the U.S. have been experiencing what has been …

Jennifer Sherman is Associate Professor of Sociology at Washington State University. She is the author of Those Who Work, Those Who Don’t: Poverty, Morality, and Family in Rural America and a coeditor of Rural Poverty in the United States.

"Conversations about housing, rapid community change, and neighborhood inequality often stop at the edge of American cities. But for places that have found stability by reorienting the local economy toward tourism, the story is more complicated. As Sherman follows residents of Paradise Valley, Washington, who struggle to find affordable housing, adapt to new economic opportunities, and navigate class and generational conflict, her book illuminates deep divides. Rather than valorizing or mourning, Dividing Paradise offers a fresh, forward-looking perspective on rural America that does not shy away from its complex, modern problems."—Matthew Desmond, Pulitzer Prize–winning author of Evicted: Poverty and Profit in the American City

"Meticulously researched and engagingly written, this book shines new light on social class in America today by studying the clash between long-standing residents of a rural community struggling with economic precarity and well-heeled urban newcomers who are attracted to the community's natural amenities but also blind to their own class privilege."—Leif Jensen, Distinguished Professor of Rural Sociology and Demography, The Pennsylvania State University