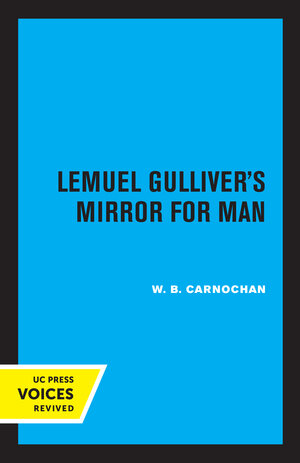 Satire, long the most neglected of literary genres, has begun to claim its share of critical attention. And no book in the satiric tradition has generated more controversy that Gulliver's Travels; since it was first published it has been the subject of an often passionate debate about its moral and esthetic value--a debate inseparable from the question of what Swift was really saying about us all, especially in Book IV. Despite the running controversy, this is the first extended study of the Travels to appear in over forty years. It places Swift's masterpiece in the perspective of its own age, but also in relation to ours. First it reviews the philosophical doubts of the Augustans about the nature of man--doubts now recognized as a major force behind Swift's satire. It examines Augustan satiric theory and its Continental background; and, coming to the Travels, treats them as one instance of a conventional form, the "satire on man." On the vexed problem of Book IV it argues that alternative views of Swift as a savage misanthrope and as a benign humanist are both inadequate, and that as in Swift's irony generally, what seem to be contradictory truths are simultaneously in force. The study is concerned throughout with the way values operate in a satiric context. What, for example are we to make of Gulliver's pious attachment to "truth"-telling? In this connection, a speculative theory is proposed which relates Swift's satiric intentions to the epistemology of John Locke. Finally, an epilogue looks ahead to some modern writers--Lewis Carroll, Joyce, Vladimir Nabokov--whose habits throw a retrospective light on Swift's. The study, broadly speaking, is not only about Gulliver's Travels but also about the psychology of the satirist and about the mind's response, whether the Augustans' or our own, at moments of intellectual crisis. This title is part of UC Press's Voices Revived program, which commemorates University of California Press's mission to seek out and cultivate the brightest minds and give them voice, reach, and impact. Drawing on a backlist dating to 1893, Voices Revived makes high-quality, peer-reviewed scholarship accessible once again using print-on-demand technology. This title was originally published in 1968.

At the time of original publication, W.B. Carnochan was Associate Professor of English, Stanford University.