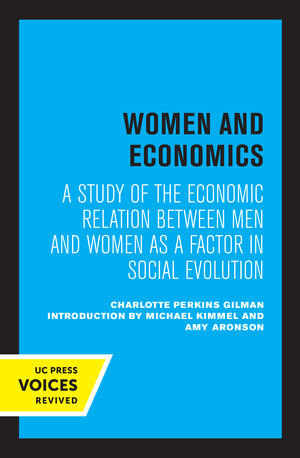 When Charlotte Perkins Gilman's first nonfiction book, Women and Economics, was published exactly a century ago, in 1898, she was immediately hailed as the leading intellectual in the women's movement. Her ideas were widely circulated and discussed; she was in great demand on the lecture circuit, and her intellectual circle included some of the most prominent thinkers of the age. Yet by the mid-1960s she was nearly forgotten, and Women and Economics was long out of print. Revived here with new introduction, Gilman's pivotal work remains a benchmark feminist text that anticipates many of the issues and thinkers of 1960s and resonates deeply with today's continuing debate about gender difference and inequality. Gilman's ideas represent an integration of socialist thought and Darwinian theory and provide a welcome disruption of the nearly all-male canon of American economic and social thought. She stresses the connection between work and home and between public and private life; anticipates the 1960s debate about wages for housework; calls for extensive childcare facilities and parental leave policies; and argues for new housing arrangements with communal kitchens and hired cooks. She contends that women's entry into the public arena and the reforms of the family would be a win-win situation for both women and men as the public sphere would no longer be deprived of women's particular abilities, and men would be able to enlarge the possibilities to experience and express the emotional sustenance of family life. The thorough and stimulating introduction by Michael Kimmel and Amy Aronson provides substantial information about Gilman's life, personality, and background. It frames her impact on feminism since the Sixties and establishes her crucial role in the emergence of feminist and social thought. This title is part of UC Press's Voices Revived program, which commemorates University of California Press's mission to seek out and cultivate the brightest minds and give them voice, reach, and impact. Drawing on a backlist dating to 1893, Voices Revived makes high-quality, peer-reviewed scholarship accessible once again using print-on-demand technology. This title was originally published in 1998.

Charlotte Perkins Gilman (1860-1935), author of the celebrated short story "The Yellow Wallpaper," is regarded by many as a leading intellectual in the women's movement in the United States during the first two decades of the twentieth century. Michael Kimmel is Distinguished Professor of Sociology at SUNY, Stony Brook, and the author of Manhood in America: A Cultural History. Amy Aronson is a professor of Journalism and Media Studies at Fordham University.