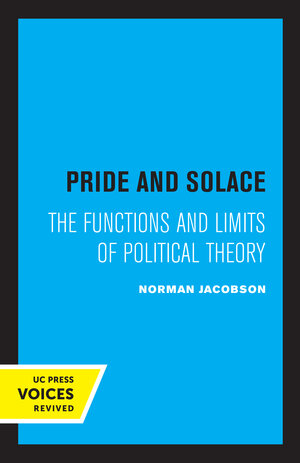 Pride and Solace The Functions and Limits of Political Theory

In Pride and Solace, Norman Jacobson presents a novel perspective on the history of politcal theory. He sees an implicit conspiracy between political thinkers and their audience, in which theory feeds the common longing for solace, while the conversion of the audience to the thinker’s truth gratifies a craving for immortality, the thinker’s pride.

In each age since the birth of the modern state, political theorists have found new forms of solace to meet the needs and character of their times. Machiavelli offers his Prince, the political warrior and national savior. Hobbes combats people’s fears of their innate disorderly passions with great artificial systems of law and science. And to give people all the the advantages of both the state of nature and civilized life, Rousseau fashions the social contract as the new basis of human political community.

Despite attempts to develop a political theory without solace by such writers as Orwell, Arendt, and Camus, theorists still flourish who profess a dogmatic faith in history or in revolution, in Western technological superiority or Third World righteousness, and who condone torture and casual murder to attain ends seen as just, honorable, or foreordained.

Jacobson’s book wages an intellectual struggle on two fronts: against the prideful offer of salvation by political means, and against the stoical rejection of solace in any form whatever. This title is part of UC Press's Voices Revived program, which commemorates University of California Press’s mission to seek out and cultivate the brightest minds and give them voice, reach, and impact. Drawing on a backlist dating to 1893, Voices Revived makes high-quality, peer-reviewed scholarship accessible once again using print-on-demand technology. This title was originally published in 1978.

Norman Jacobson was Professor of Political Science at the University of California, Berkeley.