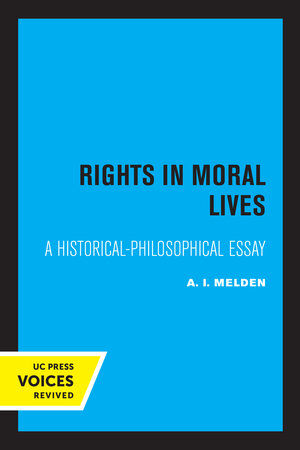 In Rights in Moral Lives, A. I. Melden, a distinguished philosopher and moral rights theorist, examines important changes that have occurred in our thinking about rights since first mention of them was made in early modern times. His inquiry is framed by an opening question and a concluding response. The question is whether the Greeks had any conception of a moral right. Some argue that they did not, on the ground that they had no word for a right. Others claim that they did, since they employed certain locutions, the equivalents of which in our language are tied to some notion of a moral right.

Melden reviews in detail some of the most important historical conceptions of rights and examines serious questions raised by the fact that there have been striking changes in our thinking about rights. His discussion elucidates the place of moral rights in the broader network of moral concepts, along with the role they should play in our moral lives. Among the fundamental issues raised and discussed are the ways in which we are to understand various sorts of rights, the relation of special moral rights to our basic human rights, the now familiar claim that there are animal rights, the nature of moral progress, and the dream of a moral science.
This title is part of UC Press's Voices Revived program, which commemorates University of California Press’s mission to seek out and cultivate the brightest minds and give them voice, reach, and impact. Drawing on a backlist dating to 1893, Voices Revived makes high-quality, peer-reviewed scholarship accessible once again using print-on-demand technology. This title was originally published in 1988.

A. I. Melden was Professor Emeritus of Philosophy at the University of California, Irvine, and the author of numerous influential works on rights theory and moral philosophy, among them Rights and Persons.

"I believe it to be an exceptionally important book—not a trendy one, but rather one whose importance will be sustained for quite some time."—Allen E. Buchanan, University of Arizona