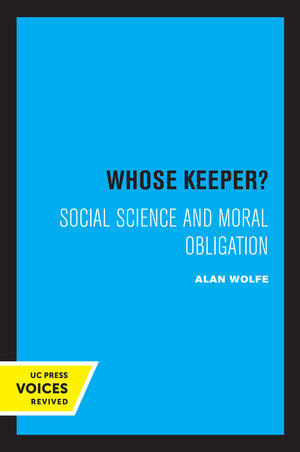 Whose Keeper? is a profound and creative treatise on modernity and its challenge to social science. Alan Wolfe argues that modern liberal democracies, such as the United States and Scandinavia, have broken with traditional sources of mortality and instead have relied upon economic and political frameworks to define their obligations to one another. Wolfe calls for reinvigorating a sense of community and thus a sense of obligation to the larger society. This title is part of UC Press's Voices Revived program, which commemorates University of California Press’s mission to seek out and cultivate the brightest minds and give them voice, reach, and impact. Drawing on a backlist dating to 1893, Voices Revived makes high-quality, peer-reviewed scholarship accessible once again using print-on-demand technology. This title was originally published in 1989.

At the time of original publication, Alan Wolfe was Professor of Sociology and Political Science and Dean of the Graduate Faculty, New School for Social Research, and author of The Limits of Legitimacy and America's Impasse, among other books.

"Alan Wolfe has written a cogent, interesting, often lively book. HIs grasp of the social sciences is impressive, as is the sweep of his interests."—Peter L. Berger, New York Times Book Review

"Wolfe's provocative survey of the breakdown of civil society spares neither right-wing champions of 'economic freedom' nor left-liberal advocates of an expanded welfare state. . . . [Whose Keeper?] presents a compelling argument with passion and clarity."—Michael Kazin, Washington Post

"Wolfe has accomplished a minor miracle. He has written a book that offers genuinely fresh insights into the ever more intractable dilemmas of modernity."—Jean Bethke Elshtain, Commonweal

"This is one of the most important books in years, disturbing in the best sense of the word and fascinating even when I disagreed with it."—Michael Harrington, author of The Other America

"By showing that the social sciences provide the operative moral philosophies of modern societies, Wolfe gives us a new understanding of the fundamental predicaments of modernity. His contrast between the moral logics of the market in the United States and of the welfare state in Scandinavia is particularly brilliant."—Robert Bellah, coauthor of Habits of the Heart 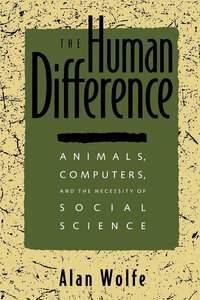