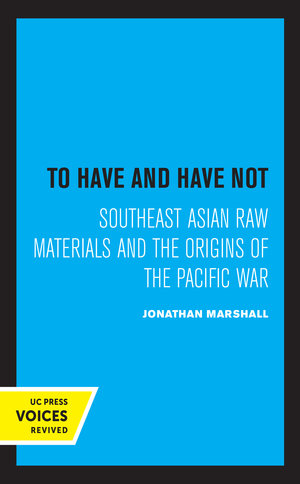 Jonathan Marshall makes a provocative statement: it was not ideological or national security considerations that led the United States into war with Japan in 1941. Instead, he argues, it was a struggle for access to Southeast Asia's vast storehouse of commodities—rubber, oil, and tin—that drew the United States into the conflict. Boldly departing from conventional wisdom, Marshall reexamines the political landscape of the time and recreates the mounting tension and fear that gripped U.S. officials in the months before the war. Unusual in its extensive use of previously ignored documents and studies, this work records the dilemmas of the Roosevelt administration: it initially hoped to avoid conflict with Japan and, after many diplomatic overtures, it came to see war as inevitable. Marshall also explores the ways that international conflicts often stem from rivalries over land, food, energy, and industry. His insights into "resource war," the competition for essential commodities, will shed new light on U.S. involvement in other conflicts—notably in Vietnam and the Persian Gulf. This title is part of UC Press's Voices Revived program, which commemorates University of California Press’s mission to seek out and cultivate the brightest minds and give them voice, reach, and impact. Drawing on a backlist dating to 1893, Voices Revived makes high-quality, peer-reviewed scholarship accessible once again using print-on-demand technology. This title was originally published in 1995.

At the time of original publication, Jonathan Marshall was the economics editor for the San Francisco Chronicle and coauthor (with Peter Dale Scott) of Cocaine Politics: Drugs, Armies, and the CIA in Central America.

"An outstanding contribution to understanding the road to World War II in the Far East. . . . An excellent historical narrative, with enough interesting detail to move even the strongest skeptic."—Laurence H. Shoup, author of The Carter Presidency and Beyond

"Jonathan Marshall deftly argues that the decisive turn in U.S. policy toward war with Japan came because Japan pressed upon raw materials vital to America. . . . This work will be the definitive study of materials policy and the coming of the war."—Bruce Cumings, Northwestern University

"Marshall moves the oil and mineral resources of Southeast Asia to the center stage. . . . Both specialists and general readers will be very interested in the book's argument."—Leonard Liggio, George Mason University