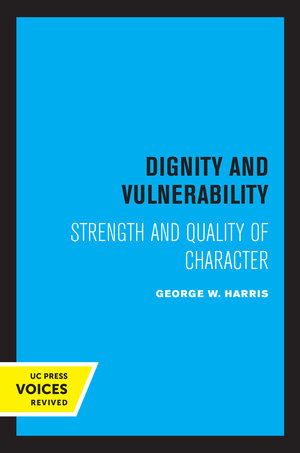 Dignity and Vulnerability Strength and Quality of Character

In this significant addition to moral theory, George W. Harris challenges a view of the dignity and worth of persons that goes back through Kant and Christianity to the Stoics. He argues that we do not, in fact, believe this view, which traces any breakdowns of character to failures of strength. When it comes to what we actually value in ourselves and others, he says, we are far more Greek than Christian. At the most profound level, we value ourselves as natural organisms, as animals, rather than as godlike beings who transcend nature.

The Kantian-Christian-Stoic tradition holds that if we were fully able to realize our dignity as Kantians, Christians, or Stoics, we would be better, stronger people, and therefore less vulnerable to character breakdown. Dignity and Vulnerability offers an opposing view, that sometimes character breaks down not because of some shortcoming in it but because of what is good about it, because of the very virtues and features of character that give us our dignity. If dignity can make us fragile and vulnerable to breakdown, then breakdown can be benign as well as harmful, and thus the conceptions of human dignity embedded in the tradition leading up to Kant are deeply mistaken. Harris proposes a foundation for our belief in human dignity in what we can actually know about ourselves, rather than in metaphysical or theological fantasy. Having gained this knowledge, we can understand the source of real strength.
This title is part of UC Press's Voices Revived program, which commemorates University of California Press’s mission to seek out and cultivate the brightest minds and give them voice, reach, and impact. Drawing on a backlist dating to 1893, Voices Revived makes high-quality, peer-reviewed scholarship accessible once again using print-on-demand technology. This title was originally published in 1997.

George W. Harris is Chancellor Professor of Philosophy, Emeritus, at the College of William and Mary.

"An original, thoughtful, and sensitive treatment of good character and a fresh critical look at the more familiar Kantian, Epicurean, and Stoic views of good character. . . . It will be widely read and discussed."—Noah Lemos, author of Intrinsic Value