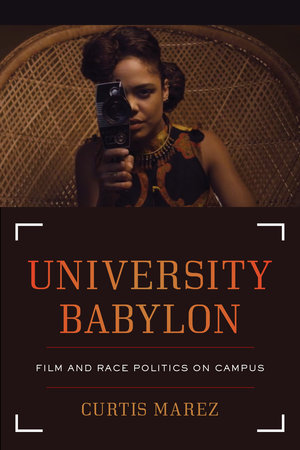 From the silent era to the present, film productions have shaped the way the public views campus life. Collaborations between universities and Hollywood entities have disseminated influential ideas of race, gender, class, and sexual difference. Even more directly, Hollywood has drawn writers, actors, and other talent from ranks of professors and students while also promoting the industry in classrooms, curricula, and film studies programs. In addition to founding film schools, university administrators have offered campuses as filming locations.

In University Babylon, Curtis Marez argues that cinema has been central to the uneven incorporation and exclusion of different kinds of students, professors, and knowledge. Working together, Marez argues, film and educational institutions have produced a powerful ideology that links respectability to academic merit in order to marginalize and manage people of color. Combining concepts and methods from critical university studies, ethnic studies, native studies, and film studies, University Babylon analyzes the symbolic and institutional collaborations between Hollywood filmmakers and university administrators over the representation of students and, by extension, college life more broadly.

Curtis Marez is Professor in the Ethnic Studies Department at the University of California, San Diego, and the author of Drug Wars: The Political Economy of Narcotics and Farm Worker Futurism: Speculative Technologies of Resistance.

"Marez convincingly delineates how a particular idea of the university has served—and continues to serve—to define belonging and merit on college campuses in terms of white supremacy and patriarchal heteronormativity."—American Literary History