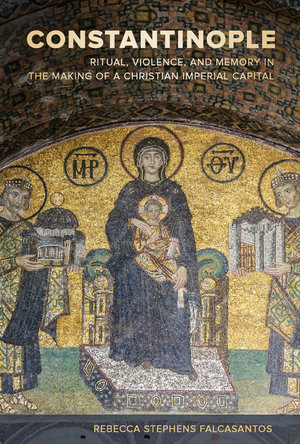 Constantinople Ritual, Violence, and Memory in the Making of a Christian Imperial Capital

As Christian spaces and agents assumed prominent positions in civic life, the end of the long span of the fourth century was marked by large-scale religious change. Churches had overtaken once-thriving pagan temples, old civic priesthoods were replaced by prominent bishops, and the rituals of the city were directed toward the Christian God. Such changes were particularly pronounced in the newly established city of Constantinople, where elites from various groups contended to control civic and imperial religion.

Rebecca Stephens Falcasantos argues that imperial Christianity was in fact a manifestation of traditional Roman religious structures. In particular, she explores how deeply established habits of ritual engagement in shared social spaces—ones that resonated with imperial ideology and appealed to the memories of previous generations—constructed meaning to create a new imperial religious identity. By examining three dynamics—ritual performance, rhetoric around violence, and the preservation and curation of civic memory—she distinguishes the role of Christian practice in transforming the civic and cultic landscapes of the late antique polis.

While the North American Patristics Society 2020 annual conference is cancelled due to COVID-19, UC Press is excited to present new translations and also recent releases in the Christianity in Late Antiquity, …

Rebecca Stephens Falcasantos is a Research Associate and Lecturer in the Department of Religious Studies at the University of Virginia. Her research focuses on the intersection of religious practices, rhetoric, and contestations over cultural dominance in the late Roman East.

“A stimulating exploration of how conflict, communal ritual, and memory—especially as curated by historians of Late Antiquity—contributed to the creation of 'imperial Christianity.'  Well-grounded in the sources, theoretically informed, and engagingly written, Constantinople shows how the religious landscape of this city was transformed in a little over one hundred years. A valuable addition to scholarship on Christianity in the fourth and fifth centuries."—Elizabeth A. Clark, John Carlisle Kilgo Professor Emerita, Duke University

“Rebecca Stephens Falcasantos shows that ancient history, especially Late Antiquity, can be rebuilt not as a ‘dead reality’ but as a ‘lived life’ emerging from slow transformations, including not only violence and abuse but also cohabitation and dialogue. Her study of Constantinople demonstrates how reading ancient history can bear good fruits for the present.”—Rita Lizzi Testa, Professor of Roman History, University of Perugia, Italy

“A perceptive and cogently argued account of how Constantinople became Christianized. Falcasantos starts with the religious and ritual context of the city as Constantine himself might have found it and continues by analyzing its changing religious topography over the course of the long fourth century. It will be a popular choice for seminars and courses on Late Antiquity, Byzantium, or the late Roman Empire.”—Elizabeth Digeser, Professor of History, University of California, Santa Barbara

Introduction
1. Religion in Late Antiquity
2. The Founding of a City
3. Violence and the Politics of Memory
4. Cult Practice as a Technology of Social Construction
5. Imperial Piety and the Writing of Christian History
Conclusion: The Making of a Christian City