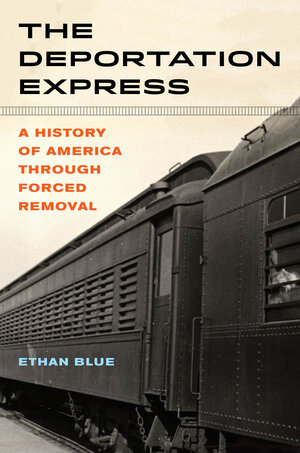 The Deportation Express A History of America through Forced Removal

A history of the United States' systematic expulsion of "undesirables" and immigrants, told through the lives of the passengers who travelled from around the world, only to be locked up and forced out aboard America's first deportation trains.

The United States, celebrated as a nation of immigrants and the land of the free, has developed the most extensive system of imprisonment and deportation that the world has ever known. The Deportation Express is the first history of American deportation trains: a network of prison railroad cars repurposed by the Immigration Bureau to link jails, hospitals, asylums, and workhouses across the country and allow forced removal with terrifying efficiency. With this book, historian Ethan Blue uncovers the origins of the deportation train and finds the roots of the current moment, as immigrant restriction and mass deportation once again play critical and troubling roles in contemporary politics and legislation.

A century ago, deportation trains made constant circuits around the nation, gathering so-called "undesirable aliens"—migrants disdained for their poverty, political radicalism, criminal conviction, or mental illness—and conveyed them to ports for exile overseas. Previous deportation procedures had been violent, expensive, and relatively ad hoc, but the railroad industrialized the expulsion of the undesirable. Trains provided a powerful technology to divide "citizens" from "aliens" and displace people in unprecedented numbers. Drawing on the lives of migrants and the agents who expelled them, The Deportation Express is history told from aboard a deportation train. By following the lives of selected individuals caught within the deportation regime, this book dramatically reveals how the forces of state exclusion accompanied epic immigration in early twentieth-century America. These are the stories of people who traveled from around the globe, only to be locked up and cast out, deported through systems that bound the United States together, and in turn, pulled the world apart. Their journey would be followed by millions more in the years to come.

By Ethan Blue, author of The Deportation Express: A History of America through Forced Removal The possibility of expedited resettlement in the US for some of the millions of Ukrainians displaced by …

Ethan Blue is Senior Lecturer in History at the University of Western Australia. He has published widely on the United States and Australian penal systems. He lives in Perth, Australia.

"More than simply documenting migrants’ trials and tribulations, Blue highlights the increasingly constricted lines around U.S. citizenship in the 1910s. . . . The Deportation Express makes a meaningful contribution as the first book to examine the mechanics of expulsion during 'the age of rail-based removal.'"—Journal of Social History

"Offers valuable insights on how racism and exclusionary borders take shape through physical infrastructure. These insights can help us understand the terrible costs of war, and the true wages of peace, from the standpoint of the global majority."—Public Books

"Exciting and original, this book is a significant contribution at the forefront of US history and immigration history. It examines the displacement and erasure of people of color in the nation-building project of white Americans beyond the colonial period. Using never-before-seen immigration officials' communications and correspondence, the memoirs of a physician hired on the deportation trains, employee records, train itineraries, and passenger lists, this book even opens up the experience of deportees as well as those of the middle managers and agents who made the state real."—Torrie Hester, author of Deportation: The Origins of U.S. Policy

"This sprawling, beautifully written, and copiously researched book illuminates the experience of deportation across space and time. Organized into two cross-continental train journeys, Blue's account synthesizes world histories of revolution and economic exigency with the evolution of the deportation process. Important scholarship and great reading!"—Rachel Ida Buff, author of Immigration and the Political Economy of Home


"This book describes one of the first—but little known—steps taken by the federal government to systematize the deportation of immigrants who violated the rules governing their lives and work in the United States. This first step illustrates how and on what grounds the criminalization and incarceration of immigrants began. I know of no other competing works. This is, I believe, the first study of deportation trains, and it's very important and original as such."—Donna Gabaccia, coauthor of Gender and International Migration: From the Slavery Era to the Global Age

"The Deportation Express is one of the best books on the history of migration I have ever read. It is fascinating, powerful, important, and highly original. Examining more than the history of deportation, Ethan Blue uses the device of the deportation train's stops on its circular route around the United States to get at the history of race, state formation, immigration, citizenship, and sexuality in the Progressive Era."—Cindy Hahamovitch, author of No Man's Land: Jamaican Guestworkers in America and the Global History of Deportable Labor

"A harrowing chronicle of the rise of the US deportation machine fired by Pullman car prison trains and telegraph wires that braided the continent, revealing the intimate distress of migrants from across the globe who sought to remain but instead were rounded up and expelled." –– Nayan Shah, author of Refusal to Eat, Stranger Intimacy, and Contagious Divides

"This evocative story of deportation trains and some of the nearly one million people forced to board them in the early twentieth century provides a detailed account of the importance of the railroad for the emergence of the United States as a key player in the global capitalist economy. The insights gleaned from these analyses will be useful to all students and scholars of racial capitalism, settler colonialism, and global migration." –– Tanya Golash-Boza, author of Deported: Immigrant Policing, Disposable Labor, and Global Capitalism

"Ethan Blue reveals how deportation infrastructures, especially the train, enabled the conjoined growth and consolidation of the deportation state and carceral state, knitting together different scales of government and connecting vast spatial expanses. As it follows the tendrils of movement and social control, The Deportation Express brings forward the histories of the state and corporate agents who made deportations possible and the immigrants ensnared in the trains' cages and deemed undesirable for their race, political beliefs, poverty, neurodiversity, disability, and more. A stirring achievement that should be required reading." ––A. Naomi Paik, author of Bans, Walls, Raids, Sanctuary and Rightlessness
Read More >

Part One: Building the Deportation State
1 • Planning the Journey