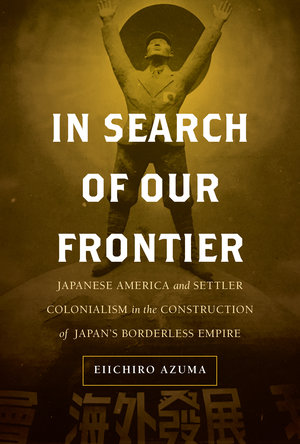 In Search of Our Frontier explores the complex transnational history of Japanese immigrant settler colonialism, which linked Japanese America with Japan’s colonial empire through the exchange of migrant bodies, expansionist ideas, colonial expertise, and capital in the Asia-Pacific basin before World War II. The trajectories of Japanese transpacific migrants exemplified a prevalent national structure of thought and practice that not only functioned to shore up the backbone of Japan’s empire building but also promoted the borderless quest for Japanese overseas development. Eiichiro Azuma offers new interpretive perspectives that will allow readers to understand Japanese settler colonialism’s capacity to operate outside the aegis of the home empire.

Eiichiro Azuma is Alan Charles Kors Term Chair Associate Professor of History and Asian American Studies at the University of Pennsylvania. He is also the author of Between Two Empires: Race, History, and Transnationalism in Japanese America and a coeditor of The Oxford Handbook of Asian American History.

"One of the most ambitious and expansive studies yet undertaken in the field of Japanese migration history. . . . Azuma deftly unravels the complex and tangled history of Japanese overseas migration."—Ethnic and Racial Studies

"A landmark study that should definitively reshape research and teaching agendas for some time to come."—Journal of Japanese Studies

"An important and provocative contribution to the fields of Japanese and Japanese American history, as well as the global history of modern imperialism. Azuma has offered a new way to think about Japan’s empire, showing us how many of the institutions and societies of the formal empire had deep ties to the informal empire of Japanese America."—H-Net

"This is a ground-breaking thesis, to date the boldest expression in English of ideas that have been percolating for more than a decade in research projects in Japan and elsewhere. Masterfully researched and boldly conceived, In Search of our Frontier should begin to redefine the terms of Japanese imperialism for years to come."—H-Soz-Kult

"Azuma provides a valuable glimpse into a certain daring and confidence that accompanied Japan’s emergence as a modern nation-state."—Monumenta Nipponica

"Azuma has written a compelling new master narrative for Japan’s rise as a Pacific power . . . bringing East Asian Area Studies into direct engagement with the Ethnic History of Japanese America, makes In Search of Frontiers an instant classic."

"In Search of Our Frontier is a truly ambitious and groundbreaking work in Japanese American studies."—Harvard Journal of Asiatic Studies

"This book underscores the fallacy of 'Asian American' as a historical category in demonstrating the distinctive characteristics of Japanese migration and settlement to the United States as citizens of the only Asian imperial power. It is ambitiously conceived, meticulously researched, and soundly organized, and it will significantly impact the fields of history of empire, migration and critical race studies, Asian American history, Japanese history, and intellectual history."—Madeline Hsu, author of The Good Immigrants: How the Yellow Peril Became the Model Minority

"Taking readers from California to Taiwan, Manchuria, and beyond, this erudite and profound study of settlers, settlement projects, and frontier visions re-charts the landscape of Japanese expansionism. In Search of Our Frontier is a landmark work that reveals the racial politics of Japanese migration and colonialism for the first time in their full complexity."—Jordan Sand, Professor of Japanese History, Georgetown University

PART ONE. IMAGINING A JAPANESE PACIFIC, 1884–1907
1. Immigrant Frontiersmen in America and the Origins of Japanese
Settler Colonialism
2. Vanguard of an Expansive Japan: Knowledge Producers, Frontier
Trotters, and Settlement Builders from across the Pacific

PART FOUR. HISTORY AND FUTURITY IN JAPAN'S IMPERIAL SETTLER COLONIALISM, 1932–1945
7. Japanese Pioneers in America and the Making of Expansionist
Orthodoxy in Imperial Japan
8. The Call of Blood: Japanese American Citizens and the Education
of the Empire’s Future “Frontier Fighters”