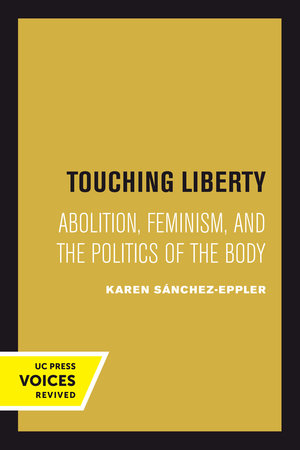 Touching Liberty Abolition, Feminism, and the Politics of the Body

In this striking study of the pre–Civil War literary imagination, Karen Sánchez-Eppler charts how bodily difference came to be recognized as a central problem for both political and literary expression. Her readings of sentimental anti-slavery fiction, slave narratives, and the lyric poetry of Walt Whitman and Emily Dickinson demonstrate how these texts participated in producing a new model of personhood—one in which the racially distinct and physically constrained slave body converged alongside the sexually distinct and domestically circumscribed female body.

Moving from the public domain of abolitionist politics to the privacy of lyric poetry, Sánchez-Eppler argues that attention to the physical body blurs the boundaries between public and private. Drawing analogies between black and female bodies, feminist-abolitionists use the public sphere of anti-slavery politics to write about sexual desires and anxieties they cannot voice directly. However, Sánchez-Eppler warns against exaggerating the positive links between literature and politics. She finds that the relationships between feminism and abolitionism reveal patterns of exploitation, appropriation, and displacement of the black body that acknowledge the difficulties in embracing “difference” in the nineteenth century as in the twentieth. Her insightful examination of these issues makes a distinctive mark within American literary and cultural studies.

This title is part of UC Press’s Voices Revived program, which commemorates University of California Press’s mission to seek out and cultivate the brightest minds and give them voice, reach, and impact. Drawing on a backlist dating to 1893, Voices Revived makes high-quality, peer-reviewed scholarship accessible once again using print-on-demand technology. This title was originally published in 1993.

Karen Sánchez-Eppler is Professor of American Studies and English at Amherst College.

“Extremely well researched, finely nuanced, and clearly written. . . . Her analyses are stunning. . . . This study juxtaposes consideration of noncanonical works with canonical works to produce remarkable insights about the politics of the body during an intensely political period of the nineteenth century.”—Barbara Christian, author of Black Women Novelists

“A superb contribution . . . [and] highly important study that will make its mark on the fields of American literary and cultural studies. In addition, Sánchez-Eppler performs an extremely valuable political service in exposing the ‘asymmetries’ between white and Black women in feminist-abolitionist discourse and the manner in which ‘moments of identification’ become ‘acts of appropriation.’ This issue continues to be relevant to feminists today. Her extension of this insight to Whitman’s ‘poetics of merger’ is also provocative, adding another dimension to the cautionary enterprise of assessing the limitations of white radicalism.”—Carolyn L. Karcher, editor of Lydia Maria Child’s “Hobomok” and Other Writings on Indians

“This book is an insightful, lucid, and persuasive discussion of the tension between the abstract language of the state and the disruptive discourses of abolitionism and feminism. It promises to have a profound impact upon the ways in which teachers, scholars, students, and general readers conceptualize nineteenth-century U.S. literature and culture.”—Valerie Smith, author of Self-Discovery and Authority in Afro-American Narrative

1. Bodily Bonds: The Intersecting Rhetorics of
Feminism and Abolition
2. To Stand Between: Walt Whitman's Poetics of
Merger and Embodiment
3· Righting Slavery and Writing Sex:
The Erotics of Narration
Harriet Jacobs's Incidents
4· At Home in the Body: The Internal Politics of
Emily Dickinson's Poetry