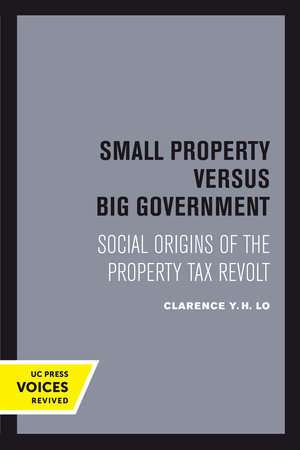 Clarence Lo's investigation of California's Proposition 13 and other tax reduction bills is both a tribute and a warning to people who get "mad as hell" and try to do something about being pushed around by government. Homeowners in California, faced with impossible property tax bills in the 1970s, got mad and pushed back, starting an avalanche that swept tax limitation measures into state after state. What we learn is that, although the property tax was slashed, two-thirds of the benefits went to business owners rather than homeowners.

How did a crusade launched by homeowning consumers seeking tax relief end up as a pro-business, supply-side political program? To trace the transformation, Lo uses the firsthand recollections of 120 activists in the movement, going back to the 1950s. He shows how their protests were ignored until a suburban alliance of upper-middle-class property owners and business owners took charge. It was the program of that latter group, not the plight of the moderate-income homeowner, that inspired tax revolts across the nation and shaped the economic policies of the Reagan administration.
This title is part of UC Press's Voices Revived program, which commemorates University of California Press’s mission to seek out and cultivate the brightest minds and give them voice, reach, and impact. Drawing on a backlist dating to 1893, Voices Revived makes high-quality, peer-reviewed scholarship accessible once again using print-on-demand technology. This title was originally published in 1990.

Clarence Y. H. Lo is Associate Professor of Sociology at the University of Missouri.

"Lo writes with wonderful clarity and empathy. He has produced an in-depth analysis of the anti-corporatist roots of the property tax revolt and of the way the exigencies of power shaped and distorted its evolution."—Frances Fox Piven, author of Poor People's Movements