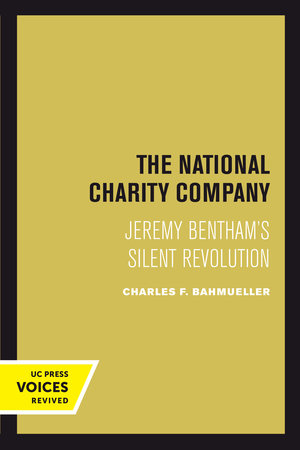 At the end of 1795 Jeremy Bentham, the English Utilitarian philosopher and reformer, began to compose a far-reaching plan. He proposed to restructure the English Poor Law, a set of laws for the relief of poverty first codified under Queen Elizabeth. Bentham's plan was to dispense poor relief through a national network of workhouses (the National Charity Company) constructed on the basis of his famous Panopticon architectural principle and coordinated through a single centralized administrative system.

Charles F. Bahmueller analyzes the ethical, sociological, economic, and political aspects and implications of Bentham's proposal. Emphasizing that Bentham sought constantly to eliminate contingency from social life, Bahmueller shows how his scheme was a revealing harbinger of the modern welfare state.

The National Charity Company shows us eighteenth-century politicians, economists, administrators, and reformers wrestling with the problems of distributive justice, economic instability, and repressive socioeconomic modes of organization that are central to contemporary political debate. The poor must be fed and clothed and employed—but they must also be ruled, from Bentham's point of view: they must, above all, be controlled. This book reveals tensions between order and freedom, paternalism and individualism, and social security and market forces that are of undeniable relevance to modern life.
This title is part of UC Press's Voices Revived program, which commemorates University of California Press’s mission to seek out and cultivate the brightest minds and give them voice, reach, and impact. Drawing on a backlist dating to 1893, Voices Revived makes high-quality, peer-reviewed scholarship accessible once again using print-on-demand technology. This title was originally published in 1981.

At the time of original publication, Charles F. Bahmueller was Assistant General Editor of the Collected Works of Jeremy Bentham.