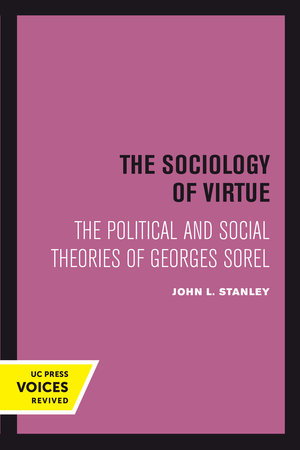 Georges Sorel's reputation as a proponent of violence has helped to link his ideas to fascist and totalitarian thought. Much of the literature on Sorel as developed this theme, at the expense of what Sorel himself stated as his primary purpose, "the discovery of the historical genesis of morals." How, Sorel asked, in the light of the development of modern industry and the vast powers of the modern state the individual can possess a sense of self-worth and at the same time help to sustain a cultural vitality similar to the great societies of antiquity? How is it possible to avoid the utter resignation and nihilistic relativism of modern existence? In his writings Sorel outlined a sociology of virtue that combined the importance of family love as the basis of community feelings with acceptance of the basis of individual vitality as constant industrial struggle against nature. Sorel's solution is different from Marx's: in place of the ida of transcended alienation, Sorel envisions an agonal striving against nature's unceasing resistance to our efforts. The Feuerbachian unity of nature that, for Marx, had been alienated under capitalism, Sorel regarded as being inherently fragmented by scientific procedures themselves, as well as by the industrial processes that correspond to those scientific procedures. For Sorel, the struggle against nature is the struggle that enables man to overcome himself, to strive against his own inclination to passivity, sloth, and licentiousness. The Marxist concept of totality so necessary to the vision of a communist society is rejected, in favor of a pragmatic, pluralist view of nature that parallels the social pluralism of a regime of workers' syndicates. The primary function of Sorel's famous "myth of the general strike" is to link the workers' constant struggles against capitalist employers to the never-ending struggle against nature. The feelings engendered by such a strubble constitute the true core of socialism; without such feelings, socialism is doomed to the same decay that Sorel and Marx foresaw for capitalist civilization. This title is part of UC Press's Voices Revived program, which commemorates University of California Press’s mission to seek out and cultivate the brightest minds and give them voice, reach, and impact. Drawing on a backlist dating to 1893, Voices Revived makes high-quality, peer-reviewed scholarship accessible once again using print-on-demand technology. This title was originally published in 1981.