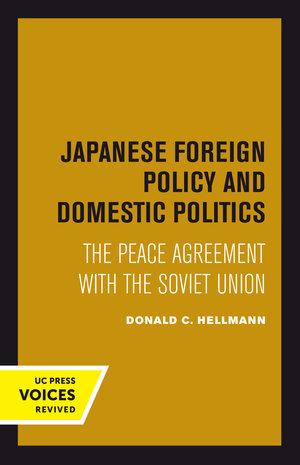 After the withdrawal of the Allied Occupation forces, many Japanese political leaders sought for their country a larger and more independent role in world affairs. Thus, the newly installed Hatoyama Government made known its desire for normal diplomatic relations with both the Soviet Union and the (Communist) Republic of china--a goal that became a major Party slogan. The subsequent negotiations for a peace agreement with the Soviet Union precipitated intense domestic political controversy, n part because the issue represented the first major act of foreign policy to be proposed by the government since the restoration of national independence; as such, it attracted many politicians who were just then emerging or reemerging after the Allied purge of pre-war and wartime political leaders. The battle was waged with little concern for the central question of national policy; instead, the main attraction was political--party and factional--power. The two-year conflict, which continued until the conclusion of an agreement with the Soviet Union in 1956, determined many of the characteristic and permanent features that the Japanese political order has displayed since that time. Hence the interest that attaches to this study, which analyzes the political elements affecting the course of negotiations with Russia: public opinion, political parties, private pressure groups, and the formal institutions of government. Mr. Hellmann's perceptive appraisal of the action and interaction of these elements leads to conclusions that challenge many commonly held assumptions about the nature of the Japanese political system, particularly those assumptions concerning the influence of business groups. Since his perspective on the entire political process affecting the negotiations with the Soviet Union is sufficiently broad to permit him to draw parallels with comparable processess in Western nations, the book should interest student of comparative and international politics as well as those concerned with the widening role of Japan in East Asian politics. This title is part of UC Press's Voices Revived program, which commemorates University of California Press’s mission to seek out and cultivate the brightest minds and give them voice, reach, and impact. Drawing on a backlist dating to 1893, Voices Revived makes high-quality, peer-reviewed scholarship accessible once again using print-on-demand technology. This title was originally published in 1969.

Donald C. Hellman is Professor Emeritus, Political Science and Jackson School of International Studies at the University of Washington.