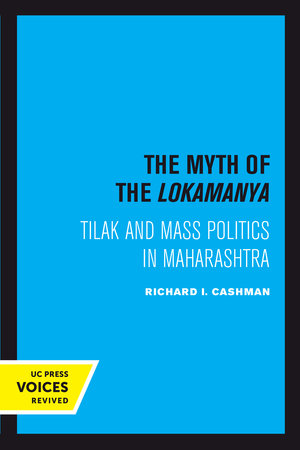 The Myth of the Lokamanya Tilak and Mass Politics in Maharashtra

Lokamanya (revered leader) Bal Gangadhar Tilak (1856 - 1920), the extremist politician of Maharashtra, a region of western India, was one of the first Congress Party leaders to adopt the strategy of mass politics. Interpretations of his role and his achievement differen greatly. Some historians depict Tilak as India's first mass politician who was a creative nationalist myth-maker; other suggest that he was an opportunist who manipulated politics for selfish, elitist purposes. With an eye to resolving these conflicting opinions, Cashman related Tilak's ideology to his political organization. the author concentrates on four mass movements, studying the Lokamanya when he was engaged in political action and comparing his public statements with his political tactics. This approach provides a means of examining the manner in which Tilak redefined myths and of assessing the value of myths for purposes of political mobilization. Cashman suggests deficiencies in previous interpretations of Tilak. Arguing that the limitations of the mass movements need not be explained by the inadequacies of myths, he demonstrates that instead they reflected the transitional state of Maharashtraian society, which lacked a broad consensus. Tilak was active at a time when there was no common goal, no broader objective, in which sectional interests might be subsumed. He symbolized the uncertain striving of his society for some new direction, whose nature was yet unknown. He did not create the myth of the Lokamanya or the ideology of nationalism but, responding to social and political pressures, became a prisoner of the myths. Much writing of Indian history has been influenced either by a narrow ideological approach or by a retreat to arithmetical pragmatism. Cashman attempts to restore a balance by reexamining the relationship of myth to politics. This title is part of UC Press's Voices Revived program, which commemorates University of California Press’s mission to seek out and cultivate the brightest minds and give them voice, reach, and impact. Drawing on a backlist dating to 1893, Voices Revived makes high-quality, peer-reviewed scholarship accessible once again using print-on-demand technology. This title was originally published in 1975.

At the time of original publication, Richard I. Cashman was a Lecturer in the School of History, The University of New South Wales.