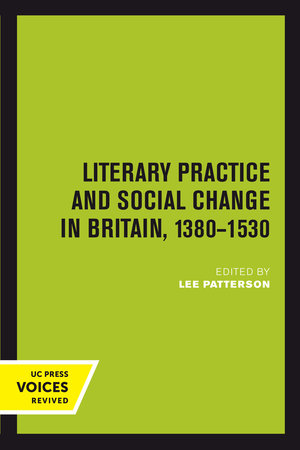 As a traditional site of historical criticism, medieval studies is particularly well placed to benefit from the recent reemergence of historicism in literary studies. But this new "critical historicism" differes from the traditional criticism in both method an interests, differences that are well illustrated by this collection. A concern with politics, a reliance on the materials of economic and social history, a conception of writing as a form of social practices, a focus upon the forces of change in medieval culture, and unwillingness to observe the usual distinction between literary and historical texts, and a historicization of their own activity--these characteristics make these essays a significant contribution to medieval studies. Moreover, both in conception and execution the essays reject the barrier that the humanist account of history has erected between a Middle Ages stigmatized as distant and other and a Renaissance consecrated as the beginning of the modern world. Thus they invite the attention of nonmedievalists, especially Renaissance specialists, who wish to test their assumptions about medieval literature against some of the best recent work in the field. The authors consider a wide range of materials. Three of the essays explore Chaucer's career as a bureaucrat, a diplomat, and a poet. Other topics include Langland's self-constitution in Piers Plowman, the medieval production and modern reception of the mystery plays, Hoccleve's innovative strategies for offering political advice to his king, and the ideological and psychological interests that governed the idea of the city in sixteenth-century Scotland. All scholars and studies of the Middle Ages, comparative literature, and literature and language programs generally will appreciate this ground-breaking collection. Contributors:Anne MiddletonPaul StrohmLee PattersonDavid WallaceLarry ScanlonTheresa ColettiLouise Fradenburg This title is part of UC Press's Voices Revived program, which commemorates University of California Press’s mission to seek out and cultivate the brightest minds and give them voice, reach, and impact. Drawing on a backlist dating to 1893, Voices Revived makes high-quality, peer-reviewed scholarship accessible once again using print-on-demand technology. This title was originally published in 1990.

Lee Patterson was scholar of medieval literature and the Frederick W. Hilles Professor Emeritus of English at Yale. He is the author of Negotiating the Past: The Historical Understanding of Medieval Literature.