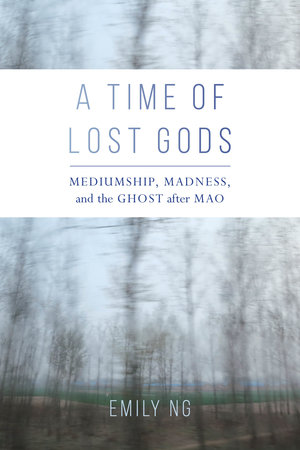 A Time of Lost Gods Mediumship, Madness, and the Ghost after Mao

Traversing visible and invisible realms, A Time of Lost Gods attends to profound rereadings of politics, religion, and madness in the cosmic accounts of spirit mediumship. Drawing on research across a temple, a psychiatric unit, and the home altars of spirit mediums in a rural county of China’s Central Plain, it asks: What ghostly forms emerge after the death of Mao and the so-called end of history?

The story of religion in China since the market reforms of the late 1970s is often told through its destruction under Mao and relative flourishing thereafter. Here, those who engage in mediumship offer a different history of the present. They approach Mao’s reign not simply as an earthly secular rule, but an exceptional interval of divine sovereignty, after which the cosmos collapsed into chaos. Caught between a fading era and an ever-receding horizon, those “left behind” by labor outmigration refigure the evacuated hometown as an ethical-spiritual center to come, amidst a proliferation of madness-inducing spirits. Following pronouncements of China’s rise, and in the wake of what Chinese intellectuals termed semicolonialism, the stories here tell of spirit mediums, patients, and psychiatrists caught in a shared dilemma, in a time when gods have lost their way.

Emily Ng is Postdoctoral Researcher at the Amsterdam School for Cultural Analysis, University of Amsterdam.

"A Time of Lost Gods is a most welcome addition to our understandings of religion and psychiatry in contemporary China."—China Quarterly

"Ng has expertly offered an invaluable insight into the Chinese religious landscape. This volume should be read by all those with an interest in Chinese religion, especially those who favor the ethnographic approach."—Religious Studies Review

“Ng opens worlds. . . .This elegantly written monograph is a must-read for scholars of the medical humanities and the anthropology of medicine in China.”—Asian Medicine

"Emily Ng's multitextured ethnography complexifies how we think of China today. Cosmological, ghost-centered, psychiatric, and literary framings of the current ethos jostle and mix, obscure and illuminate a world of relationships and psyches that seemingly has experienced every danger and multiple transformations. A book of troubling juxtapositions and uncanny connections that frees the local to resonate with global preoccupations."—Arthur Kleinman, Harvard University

"A Time of Lost Gods breaks new ground by reconsidering the long-vexed relation between mental health, spirit possession, and the state. With beautiful clarity we are brought into a contemporary Chinese world in which, despite the purificatory coercions of developmentalist state surveillance and violence, national history remains a revelatory ordeal that shatters any simple boundary between madness and divine intervention. A truly fascinating study."—Stuart Earle Strange, Assistant Professor of Anthropology at Yale-NUS College


"This stunning ethnography brings to life the cosmopolitical world of interior China haunted by the specter of Chairman Mao, the ghosts of market reform, and spirit mediums who conjure visions of a revolution. Uncompromising in its critical engagement with postsocialism and secularism, this is a timely and innovative intervention in understanding Chinese modernity."—Mei Zhan, author of Other-Worldly: Making Chinese Medicine through Transnational Frames

"This work is a brilliant reversal of the historicist orthodoxy that unabashedly names the present time as “postsocialist.” It does so by patiently listening to spirit mediums who await Mao’s return to complete his revolution. The author accesses such a dimension of historical critique by daringly bringing together the topics of religion and medical anthropology with that of state politics. This is a major contribution of a genre-defying kind."—Hoon Song, author of Incompossible North Korea

"An extraordinary study of spirit mediums, madness, and the religious imaginary in post-Mao China. Based upon extensive ethnographic research, Ng beautifully explores the ways that mediums in Hexian understand Mao, the past, and the world to come. This is a tremendously powerful work that contributes dramatically to our understandings of the religions and cultural politics of China."—Michael Puett, Harvard University

Prologue: We Never Should Have Met

Introduction: The China of China
1. After the Storm
2. Ten Thousand Years
3. Spectral Collision
4. A Soul Adrift
5. Vertiginous Abbreviation
Coda: Those Who Remain