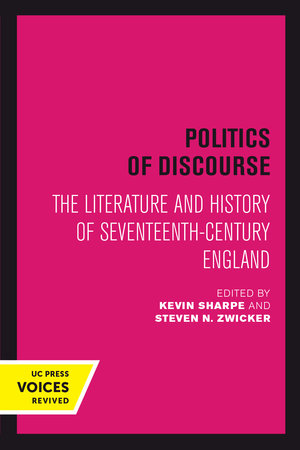 Politics of Discourse The Literature and History of Seventeenth-Century England

The outstanding essays in this volume explore the interdependency of literature and history in seventeenth-century England. The relation of text to society is examined both as theory and as practice. The theoretical essays explore writing, reading, and the emergence of the aesthetic as historical phenomena of the seventeenth century. Other contributions examine cultural and political practices that fashioned the century: patronage, representations of authority, the socialization of party politics, and fables of power.

What is often separated as a distinct sphere of “literature” is returned to the contexts of other cultural and discursive practices. Using the shaping force of history on the imagination and the status of literature as historical evidence, the authors also claim the power of imaginative texts to mold as well as reflect history. Politics of Discourse not only increases our understanding of seventeenth-century England but also advances the study of subjects of interest to cultural critics of all historical periods: genre and canon, the interplay of institution and imagination, and the symbols of power.

Kevin M. Sharpe was Director of the Centre for Renaissance and Early Modern Studies and Leverhulme Research Professor of Renaissance Studies at Queen Mary, University of London. Steven N. Zwicker is Professor of English at Washington University, St. Louis.