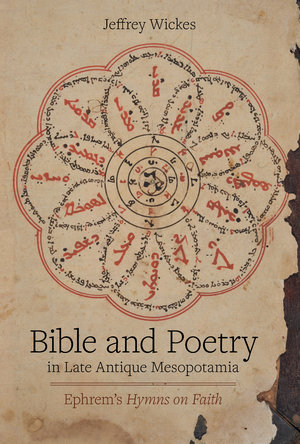 Ephrem the Syrian was one of the founding voices in Syriac literature. While he wrote in a variety of genres, the bulk of his work took the form of madrashe, a Syriac genre of musical poetry or hymns. In Bible and Poetry in Late Antique Mesopotamia, Jeffrey Wickes offers a thoroughly contextualized study of Ephrem’s magnum opus, the Hymns on Faith, delivered in response to the theological controversies that followed the First Council of Nicaea. The ensuing doctrinal divisions had tremendous impact on the course of Christianity and led in part to the development of a uniquely Syriac Church, in which Ephrem would become a central figure. Drawing on literary, ritual, and performance theories, Bible and Poetry shows how Ephrem used the Syriac Bible to construct and conceive of himself and his audience. In so doing, Wickes resituates Ephrem in a broader early Christian context and contributes to discussions of literature and religion in late antiquity.

"Wickes is an astute guide through the often-heated scholarly debates about the relationship between Syriac and Greek, and about the place of Syriac Christianity in the eastern Mediterranean world. His command of the scholarship is as solid as his mastery of the texts; he is deft, incisive, and original in his discussions. This is work of exceptional substance and significance."—Journal of Orthodox Christian Studies

"Bible and Poetry demonstrates once again the potential of Syriac literature to reshape and deepen our historiog-raphy of the formative centuries of Christianity."

"Wickes has guided the reader securely with a light through the labyrinthine paths and icons of Ephrem’s poetry, revealing the poet’s mind and personality, along with imaginative biblical landscapes and interpretations unparalleled in late antique Christian literature."

"Wickes’s study contains many helpful and good insights into the way Ephrem works as a poet, interweaving different biblical allusions for a particular purpose, and also into the ways in which he relates himself and his audience to the biblical text."

“In this insightful book, Jeffrey Wickes shows how Ephrem wove together self-portrayal with depiction of the Nicene Christ and brought both into the constructed ‘world’ of his hymns. Persuasively presenting the internal coherence of Ephrem’s endeavor, Wickes sets the hymns into the rhetorical and poetic landscape of late antiquity and proposes a new social context for them, in ‘a blurred space between liturgy and the classroom.’”—Kathleen E. McVey, Professor Emerita of History, Princeton Theological Seminary


“This book proposes a new paradigm to understand the great fourth-century Syriac poet’s engagement with the Bible. Eschewing problematic concepts such as allusion and quotation, Wickes invites us to appreciate the complex ways in which Ephrem used the Bible to construct a new literary world.”—Aaron Michael Butts, Assistant Professor, The Catholic University of America
Read More >

Abbreviations
Acknowledgments
Note to the Reader

PART ONE. EPHREM AND THE LATE ANTIQUE WORLD
1. Ephrem’s Madrashe on Faith in Context
2. Investigation

PART TWO. THE BIBLICAL POETICS OF THE MADRASHE ON FAITH
3. Bible, Polemics, and Language
4. The Poet’s “I”
5. Audience and the Vision of the Text
6. A Divine Son