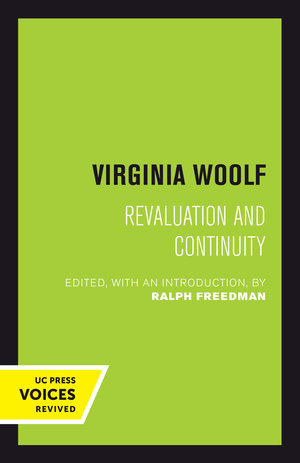 The renaissance of Virginia Woolf reflects a reassessment not only of Woolf as a writer but also of our social and political life as a whole. It points up differences between English and American readers, between older and younger critics, between men and women. Particularly striking in the revaluation is a tendency to approach Woolf as a soliloquist, a person, rather than as a detached and formal artist. In this collection, Ralph Freedman has brought together some of Woolf's most interesting commentators, whose varied concerns, traditional and modern, demonstrate the vitality and scope of Woolf criticism. Virginia Woolf: Revaluation and Continuity contains essays by Ralph Freedman, Harvena Richter, James Hafley, Avrom Fleishman, F. P. W. McDowell, Jane Marcus, Lucio Ruotolo, Maria DiBattista, Jean O. Love, Madeline Moore, James Naremore, and B. H. Fussell. This title is part of UC Press's Voices Revived program, which commemorates University of California Press’s mission to seek out and cultivate the brightest minds and give them voice, reach, and impact. Drawing on a backlist dating to 1893, Voices Revived makes high-quality, peer-reviewed scholarship accessible once again using print-on-demand technology. This title was originally published in 1980.

Ralph Freedman was Professor Emeritus of Comparative Literature and author of The Lyrical Novel: Studies in Hermann Hesse, André Gide, and Virginia Woolf; Hermann Hesse: Pilgrim of Crisis; and numerous articles on modern English and continental literature and criticism.