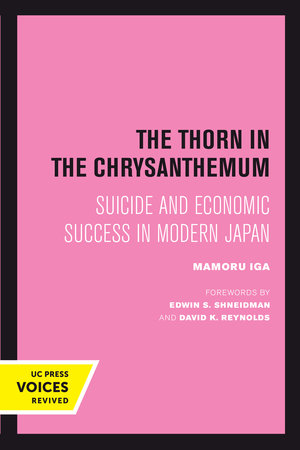 Japanese society is frequently held up to the Western world as a model of harmony and efficiency, but the price it pays tends to be overlooked. In a searching analysis that will fascinate students and admirers of Japan as much as it will inform psychologists and suicidologists, Mamoru Iga discusses the precise nature of the “thorn in the chrysanthemum,” a thorn that may hurt both the Japanese and the outsider who conducts business with them.

The author, who was reared and educated in Japan, is uniquely qualified to interpret the value orientations of a society in which suicide is all too common. He finds that the traits leading to homogeneity and extreme adaptability in that society as a whole are the very traits that can produce painful reactions in the individual. Those traits are described as monism, groupism, authoritarianism, familism, and accommodationism, and together they comprise the Japanese “social character.”

Because the individual’s behavior is based on the images, assumptions, and ideas about the world that make up his or her culture, conformism in the individual is one major manifestation of Japan’s social character. In Japan, the need to fill one’s socially prescribed role may make it doubly difficult to think independently and creatively and to find solutions for the resulting stress.

Suicide notes and other personal documents reveal the painful cost of modern Japan’s success story, as the examination of individual suicides is related both to the theoretical framework of Durkheim’s types of suicide and to the sociological patterns that characterize suicide in Japan. It is in personal value orientations, however, that Iga finds the common ground between suicide and economic success.

American readers will find especially interesting the contrast between value orientations in Japan and in the United States. Nearly the opposite of the Japanese traits described above, American values of rationalism, individualism, competition, and change create their own problems. There is much to be learned from this expert analysis of the problem of suicide in Japan.
This title is part of UC Press's Voices Revived program, which commemorates University of California Press’s mission to seek out and cultivate the brightest minds and give them voice, reach, and impact. Drawing on a backlist dating to 1893, Voices Revived makes high-quality, peer-reviewed scholarship accessible once again using print-on-demand technology. This title was originally published in 1986.