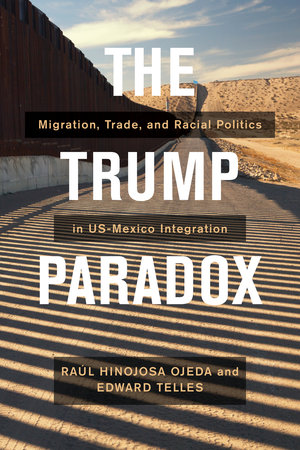 The Trump Paradox: Migration, Trade, and Racial Politics in US-Mexico Integration explores one of the most complex and unequal cross-border relations in the world, in light of both a twenty-first-century political economy and the rise of Donald Trump. Despite the trillion-plus dollar contribution of Latinos to the US GDP, political leaders have paradoxically stirred racial resentment around immigrants just as immigration from Mexico has reached net zero. With a roster of state-of-the-art scholars from both Mexico and the US, The Trump Paradox explores a dilemma for a divided nation such as the US: in order for its economy to continue flourishing, it needs immigrants and trade.

Raúl Hinojosa Ojeda is Associate Professor in the UCLA César E. Chávez Department of Chicana/o and Central American Studies and is the founder and director of the UCLA North American Integration and Development Center.

Edward Telles is Distinguished Professor of Sociology and director of the Center for Research on International Migration at UC Irvine.

"A stellar collection of essays by top scholars from both nations, The Trump Paradox: Migration, Trade, and Racial Politics in US-Mexico Relations is a must-read for anyone interested in understanding the true connections between these two countries. Chapter after chapter, the book debunks myths, sheds new light on the dynamics of migration and trade, and shows how the evidence differs from President Trump´s polarizing narrative."—Nora Lustig, Samuel Z. Stone Professor of Latin American Economics and Founding Director, Commitment to Equity Institute, Tulane University

"Immigration and trade are two longstanding key components of the relationship between Mexico and the US. The Trump Paradox offers valuable analysis that helps separate facts from political discourse and also understand the dynamics of immigration and trade under the Trump presidency. The migration phenomenon in particular will continue to be a source of tension until a better way to manage it is achieved. The book makes a great contribution towards this goal."—Gerónimo Gutiérrez Fernández, former Ambassador of Mexico and former Director of the North American Development Bank

"The Trump Paradox distills and evaporates a number of myths about the US-Mexico relationship. The paradox itself is the negative correlation between Trump supporters and the presence of Mexican immigrants and trade with Mexico. The relationship between the US and Mexico requires a saner immigration and trade policy than the one we have. The writers in The Trump Paradox help point us to a better way."—Janet Napolitano, President Emerita, University of California


"Brings a plethora of fresh evidence to understand the US-Mexico relationship, particularly around immigration and trade debates that were central to Donald Trump’s election victory in 2016, which will also remain pressing issues into the foreseeable future. Several of the chapters stand out as must-reads for scholars and students alike."—David Scott FitzGerald, author of Refuge beyond Reach: How Rich Democracies Repel Asylum Seekers

"The volume is a timely analysis of the Trump administration’s immigration and trade policies, and the public response—which the editors present as paradoxical on many different fronts. The chapters represent an impressive range of methodological and theoretical traditions, authored by a much-needed binational and interdisciplinary mix of leading migration scholars."—Shannon Gleason, Cornell University
Read More >

PART ONE. The Trump Paradox
1. How Do We Explain Trump’s Paradoxical Yet Electorally Successful Use of a False US-Mexico Narrative?
Raúl Hinojosa-Ojeda and Edward Telles

2. What Were the Paradoxical Consequences of Militarizing the Border with Mexico?
Douglas S. Massey

5. How Is the Health of the Mexican-Origin Population on Both Sides of the Border Affected by Policies and Attitudes in the United States?
Fernando Riosmena, Hiram Beltrán-Sánchez, Megan Reynolds, and Justin Vinneau
6. What Shall Be the Future for the Children of Migration? LASANTI and the Educational Imperative
Patricia Gándara and Gary Orfield

7. What Are the Policy Implications of Declining Unauthorized Immigration from Mexico?
Pia M. Orrenius and Madeline Zavodny

PART THREE. Trade Integration
9. Before and after NAFTA: How Are Trade and Migration Policies Changing?
Raúl Hinojosa-Ojeda, Sherman Robinson, and Karen Thierfelder

11. Is Complementarity Sustainable in the US-Mexico Automotive Sector?
Jorge Carrillo

15. What Are the Social Consequences of Immigrant Scapegoating by Political Elites?
René D. Flores

17. Anti-Immigrant Backlash: Is There a Path Forward?
Zoltan L. Hajnal