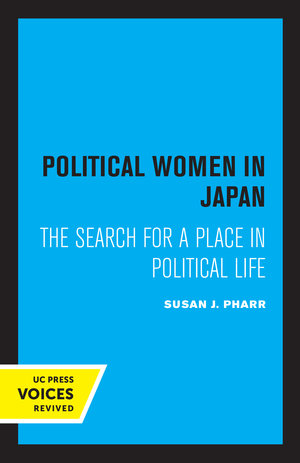 Drawing on interviews with one hundred young Japanese women engaged in a spectrum of voluntary political groups, Susan J. Pharr explores how politically active women overcome the constraints that bar or limit the political participation of the average woman. The book treats political volunteers as agents of social change in a process of role redefinition by which prevailing concepts of women's roles gradually adjust to accommodate political behavior. Tracing developments that led to the grant of suffrage and other political rights to women during the Allied occupation, Pharr sets the stage for an analysis of that process as it unfolds in the experience of individual women. She uses women's images of self and society and issues of political and gender role socialization, career and life expectations, and political role and participation to develop a three-fold typology for looking at political women in Japan. She examines both the satisfactions of political volunteerism—from the exhilaration of addressing a crowd from a sound truck to the pleasure of speaking "men's language"—and the psychological and social costs associated with it. This title is part of UC Press's Voices Revived program, which commemorates University of California Press’s mission to seek out and cultivate the brightest minds and give them voice, reach, and impact. Drawing on a backlist dating to 1893, Voices Revived makes high-quality, peer-reviewed scholarship accessible once again using print-on-demand technology. This title was originally published in 1981.

Susan J. Pharr is the Edwin O. Reischauer Professor of Japanese Politics in the Department of Government, Harvard University. She is also Director of the Program on U.S.-Japan Relations at Harvard’s Weatherhead Center for International Affairs