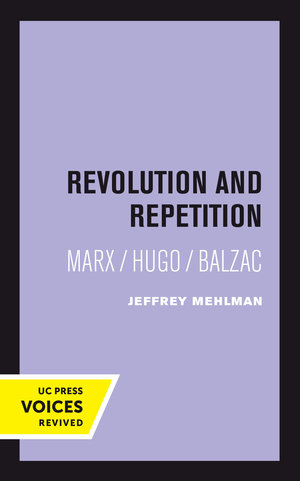 In Revolution and Repetition, Jeffrey Mehlman surveys the question of the relation between Karl Marx's writings and the institution of literature. He presents not an application of Marxian categories to literary texts, but a delineation of how the phenomenon of revolution in France is refracted through two divergent series of writings. The first comprises three works by Marx: The Class Struggles in France 1848-1850, The Eighteenth Brumaire of Louis Bonaparte, and The Civil War in France. The second consists of two exemplary nineteenth-century novels on revolution: Victor Hugo's Quatrevingt-treize and Honoré de Balzac's Les Chouans.

Mehlman also explores the limits and opportunities of reading itself. Within a series of precise textual analyses, the reader will encounter Jean Laplanche's lectures on "anxiety" in Freud, Jacques Derrida's Glas, Georg Lukács’s study of Balzac’s “realism," and Michel Foucault's genealogy of prisons, Surveiller et punir. This volume is a working introduction to what may be termed French "post-structuralism."

This title is part of UC Press's Voices Revived program, which commemorates University of California Press’s mission to seek out and cultivate the brightest minds and give them voice, reach, and impact. Drawing on a backlist dating to 1893, Voices Revived makes high-quality, peer-reviewed scholarship accessible once again using print-on-demand technology. This title was originally published in 1977.

"This is certainly one of the very brilliant and entertaining books of the last years."—Paul de Man, Yale University