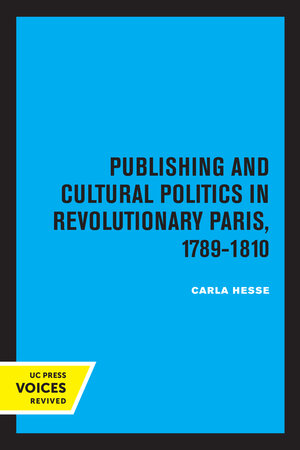 In 1789, French revolutionaries initiated a cultural experiment that radically transformed the three basic elements of French literary civilization—authorship, printing, and publishing. In a panoramic analysis, Carla Hesse tells how the Revolution shook the Parisian printing and publishing world from top to bottom, liberating the trade from absolutist institutions and inaugurating a free-market exchange of ideas.

Historians and literary critics have traditionally viewed the French Revolution as a catastrophe for French literary culture. Combing through extensive archival sources, Hesse finds instead that revolutionaries intentionally dismantled the elite literary civilization of the Old Regime to create unprecedented access to the printed word. Exploring the uncharted terrains of popular fiction, authors' rights, and literary life under the Terror, Hesse offers a new perspective on the relationship between democratic revolutions and modern cultural life.
This title is part of UC Press's Voices Revived program, which commemorates University of California Press’s mission to seek out and cultivate the brightest minds and give them voice, reach, and impact. Drawing on a backlist dating to 1893, Voices Revived makes high-quality, peer-reviewed scholarship accessible once again using print-on-demand technology. This title was originally published in 1991.

Carla Hesse is Dean of Social Sciences and Peder Sather Professor of History at the University of California, Berkeley.

"A book whose implications extend far beyond the geographical and temporal boundaries of its subject. Anyone who wishes to know the answer to Foucault's famous question, 'What is an author?,' should start here with Hesse's illuminating study of the transformation of the author from the privileged creation of the absolutist state, to the civic hero of public enlightenment, to the bourgeois head of household. . . . The consequences of the political, economic, and ideological struggles so brilliantly explored in this book continue to shape our own cultural politics."—Stephen Greenblatt, author of Shakespearean Negotiations